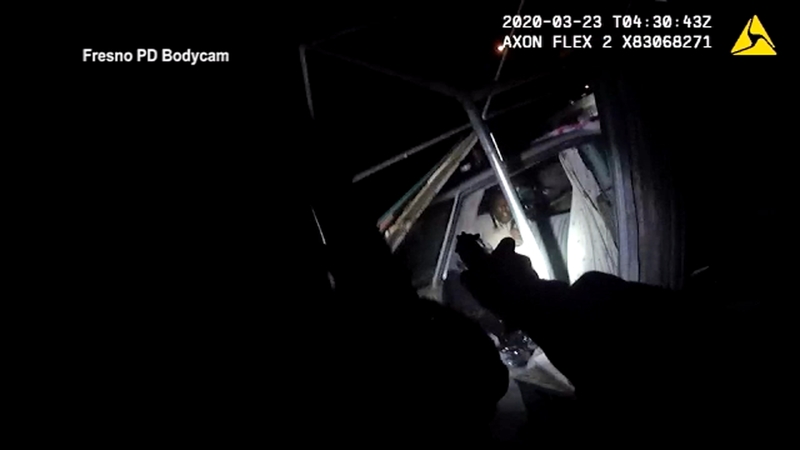 FRESNO, Calif. (KFSN) -- Action News has acquired new video from a deadly Fresno police shooting that resulted in a lawsuit from the family who called officers to the scene.

Gerald Johnson swung a shovel at a family member and barricaded himself in a broken down Chevy Impala when police came to help.

"Let me see your hands right now before I tase you," an officer can be heard saying during hours of body camera footage we acquired via a public record request. "Drop the gun. Drop the gun."

Johnson had PCP in his system and police had gotten several calls about him causing problems in a two-week period of March 2020.

This time, family members said they wanted him arrested.

But attorneys now suing over the police shooting that killed Johnson point out he was alone in the car and posed no urgent threat.

Even officers at the scene seemed to realize the weapon he displayed wasn't likely to do damage.

"It is a BB gun from what I can tell," an officer broadcast over the police radio. "He's pumping it and pulling the trigger but I'm hearing no projectiles striking things, so I believe the BB gun is empty. So I want to make sure everybody copies that."

"Gerald, just come out bro," said another officer. "We don't want to play with your BB gun."

After a couple hours of unsuccessful negotiations, officers moved in to remove the barriers Johnson constructed.

The body camera video is shaky, so it's hard to see, but Johnson had the BB gun when officers moved in and shot him.

Instead of simply reading reports from officers, Action News can now make a public records request and get body camera video.

Jurors in the civil case would also see the video at trial.

Torres says they might wonder -- even if it was reasonable for the officers to shoot in the moment -- was it unreasonable to put themselves in a position where they needed to shoot if the situation wasn't urgent?

"What did the police know and why did you put yourself in that position?" Torres said. "Because if they just stood back, they never would've had to pull the trigger."

An internal affairs investigation found the shooting justified and within policy, but the department suspended a lieutenant for three weeks for using poor discretion.

Investigators said he should've contacted SWAT before sending officers in to a likely confrontation.

"The City of Fresno provided responses to Public Records Act requests from various entities and individuals pertaining to the incident involving Gerald Johnson on March 22, 2020," city spokeswoman Sontaya Rose said. "The information provided in that response highlights the investigative process conducted by the Fresno Police Department in such matters. It is important to point out the force used in this incident was deemed to be reasonable by the Office of Independent Review (OIR) and was found to be within department policy. The single sustained policy violation is related to department protocols and not to the use of force itself. Because this matter is the subject of ongoing civil litigation the City will have no further comment at this time."

After our story aired, John Gliatta, the independent reviewer at the OIR, asked us to include additional information police received at the scene.
After one officer identified Johnson's weapon as a BB gun that was likely empty, another officer later said Johnson's son gave information that he possibly had two weapons. The officer broadcast over the radio that Johnson "had a .22."
Attorneys for family members say officers may have gotten confused since the BB gun was a .22.
Police checked records and found Johnson did not have a .22 caliber firearm registered in his name before moving in on him, but officers calculated the possibility of his having a second gun as they approached him in his family's backyard.
Attorneys for family members say their case is mostly focused on whether the officers should've been in the position to shoot, not whether the shooting was justified given Johnson's actions when police approached.

It'll be a while before a jury decides whether police did anything wrong.