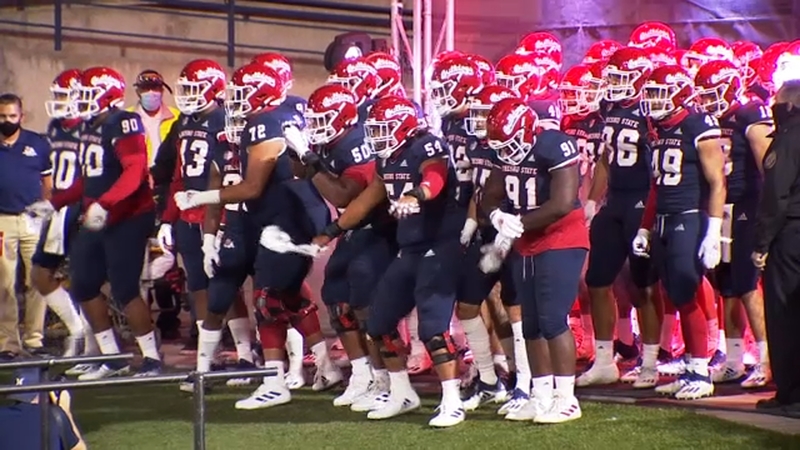 FRESNO, Calif. (KFSN) -- The year 2020 was a weird year for the Fresno State football team and one of the strangest seasons in the history of college football.

The Bulldogs finished the COVID-shortened season with two canceled games and an overall record of 3-3, losing its last two games to Nevada and New Mexico.

As Trent Dilfer likes to say, there are no excuses but there are reasons for why we saw what we did. Here are three reasons to be optimistic about this year's 2021 football season.

This was the prevailing topic throughout Fall camp. Because of county health guidelines, FS wasn't able to practice as a team last season until a little more than a month before the Hawaii game. This time around, the team has gone through an entire Spring campaign and more importantly, winter and summer workouts under strength and conditioning coach Ron McKeefery.

Night and day physical transformations for a handful of Dogs aside, the team was physically together. Coaches were in the same room as other coaches. Players were able to bond away from the field.

As Kalen DeBoer said of the difference from year 1 to year 2: "When you can't be around each other like we couldn't last summer, it's hard to really build those relationships at the level we want them to be."

2. Ronnie Rivers is back to break all the records

This year, 16 players on the FS roster are taking advantage of an extra year of eligibility approved by the NCAA due to the COVID-19 pandemic. No one is expected to have as big an impact as Ronnie Rivers (honorable mention for Tyson Maeva below).

The fifth year senior earned a spot on the preseason All-Mountain West team as well as watch lists for the Paul Hornung Award, Doak Walker Award and the Maxwell Award.

RELATED: Rivers talks in Las Vegas ahead of 2021 season

He's currently tied with Anthony Daigle for the most touchdowns in a career (44) and is just four touchdowns shy of Ryan Mathews's record of 39 career rushing touchdowns.

"We always joke around and talk trash to each other, who is better, who's not," Ronnie told Action News in May. "But he's definitely proud. I followed in his footsteps and doing big things here."

Get to 845 yards on the ground this season and Ronnie will have bragging rights at Thanksgiving dinner.

As proficient as he's proven to be on the field, Rivers has maybe taken his biggest strides off the field and in the locker room. Coaches challenged him in the offseason to get out of his comfort zone and be more of a vocal leader. In August, he was named one of the four team captains.

.@FresnoStateFB running backs @CoachLeeMarks recruited both @MalikSherrod and @lilronnie_20 out of high school when he was at Boise State. He's happy he doesn't have to coach against Rivers anymore and says the relationship they built last year will lead to success on the field. pic.twitter.com/hqv3USwb3v

A day after that was announced, Coach DeBoer let each captain speak to the team and said it was the most impressive speech he's seen Rivers give the team.

"It just was natural," DeBoer said. "It was a summary of everything he's done here. It was a pretty special thing to see a guy that I know I came in with in 2017 and see how he's grown into the type of leader he is and everything he's done on the football field, we know that's going to be special as well but what he's got in here (taps his heart) is a pretty big deal."

3 Jake Haener is the quarterback

He hit a freaking hole in one on camera. Who does that?!

RELATED: Haener hits hole in one in TV interview

Golf talent aside, he's an even better quarterback. Despite a shaky start in his Bulldog debut against Hawaii, he settled in to lead the top offense in the Mountain West in 2020. As ABC30 contributor Cam Worrell told us in the Spring, "(Haener) is the most accurate quarterback" he's seen at FS. This coming from a guy who played with David Carr and watched Derek Carr.

The Washington transfer connected on 64% of his passes for 2,021 yards and 14 touchdowns to just five interceptions. His last three games against New Mexico, Nevada and Utah State (after which point he no longer was looking over his shoulder to see if backup QB Ben Wooldridge was coming in the game), he averaged 419 passing yards a game. On top of Jalen Cropper, Josh Kelly, Keric Wheatfall and Zane Pope, the wide receiver room was improved with the addition of another Washington transfer in 6'4" WR Ty Jones.

Just day 2 of camp @FresnoStateFB but everyone's talking about WR Ty Jones.
Transfer from UW says a big reason why he came to FS was seeing Jake Haener's success. " I saw him last year going crazy...I think I need to reach out to see what the situation is like over there." @ABC30 https://t.co/TrPNfWtmSf pic.twitter.com/xkvwu98EO8

If the offensive line can stay healthy, look for him to pick apart defenses.

Tyson Maeva - As mentioned at the top, he will look to turn around a defense that gave up 30 points a game last season. The transfer from Florida International was first a transfer from Boise State. He was heavily featured on a Bronco defense that faced off against FS four times in two seasons from 2017-18, with each side winning a Mountain West championship. Another of the four team captains, Maeva will bring experience and leadership to a unit that's in need for a bounce back season.

The schedule - The Dogs will get the chance to knock off a top 15 team at Eugene (Oregon is ranked #11 in the preseason AP Top 25) and another PAC-12 team receiving votes in UCLA. Partner that with the first meeting with Boise State since the snow game in 2018 and the schedule sets up for fireworks.

The connections - At some point, the next wave of players and coaches will etch their names into the lore of Fresno State history. Until then, it's nice to know the current crop is connected to the past. Former head coach Jeff Tedford, who stepped down for health reasons following three seasons (26-14 record), has stopped by a handful of practices in the Spring and Fall. Then there's current quarterback Jake Haener connecting with FS legend Derek Carr at his training facility in Bakersfield. Carr says he gives his number to every starting quarterback at FS but "I can't say that all of them have reached out." Maybe some of that Carr/Tedford magic can rub off on this year's crop of 'Dogs.

The Red Wave - 644 days. When Fresno State takes the field to play the UCONN Huskies on August 28, it will have been 644 days since the Bulldogs last played a football game in Bulldog Stadium front of fans. That was November 23, 2019 and it was senior day for a 'Dogs team that saw Jeff Tedford giving hugs to Jorge Reyna, Mykal Walker and Josh Hokit before running down the ramp for the last time. Reading that description feels like it happened last decade. Little did we know how things would change. New coaches and new players are just part of college athletics. But how about the change we saw in 2020 brought on by *checks notes* a global pandemic?? There were times in lockdown when I lost track of what day it was. I went weeks without leaving home, had groceries delivered to the door and turned my living room into a TV studio (shoutout the grandma who noticed I wasn't getting a haircut). Oh, that same living room was also my church, my gym and the room where I met with friends and family (virtually). I know we're still not done with COVID-19. More work needs to be done to get back to the normal we once knew. But after all we've been through on our own over these past 644 days, being together again is sure to be an incredible experience. Can't wait to see you again Red Wave. I've really missed you.