Fresno State rugby in need of donations ahead of championship game 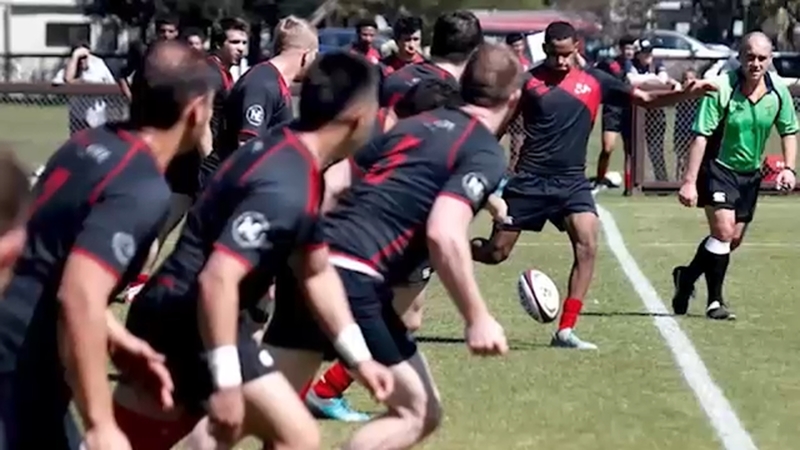 Fresno State rugby in need of donations ahead of championship game

FRESNO, Calif. (KFSN) -- Fresno State is playing for a National Championship -- albeit in a sport you probably didn't know was being played on campus.

The Bulldogs' Men's Rugby team has ascended up the rankings all season long before eventually playing their way into next week's title game against the Kansas Jayhawks.

Despite dominating their opponents all season long, this team has faced an uphill battle every step of the way.

"These athletes are the ultimate student-athlete. They pay to go to Fresno State, they don't have athlete's registration and they take their time to come out and train. To me, that is the purest form of athlete," said head Coach Patrick Quan.

What makes this magical season even more remarkable is that rugby is considered just a club sport at Fresno State -- unlike varsity scholarship sports such as football or basketball. This team operates on a shoestring budget while relying on donations and volunteers to keep the program afloat.

With mounting travel expenses ahead of next week's title game in Arlington, Texas, the Bulldogs are asking the Red Wave for support to help get them there.

"You can't start booking hotels and rooms for something you're not sure you're going to get to with money you don't have. So at this point, it's kind of frustrating because after we won in Seattle, we got about 11 days to raise money to get 35 athletes to Texas and housed and fed to play for the National Championship."

The Bulldogs rolled past San Diego and Western Washington in the West Coast Regionals for the right to face the Jayhawks.

Just getting this far is a feat in itself considering the teams they faced along the way are recognized varsity programs at their respected schools.

But Quan is not backing down and is looking forward to representing Fresno State on college rugby's biggest stage.

"We want the community to know that just because these kids aren't classically apart of the athletic program doesn't mean they're not Fresno State athletes and doesn't mean they don't represent the Valley. Eighty percent of my players are from the Valley."