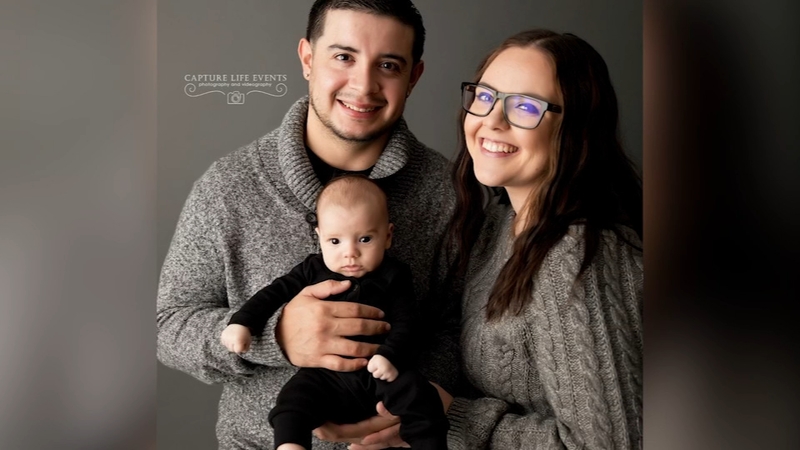 FRESNO, Calif. (KFSN) -- A Fresno family is holding onto hope after their baby was diagnosed with a rare genetic disorder.

Visits to Valley Children's Hospital have become the norm for Jocelyn Thompson, Marcus Servantes and their young son.

"He had his 25th blood draw," Thompson shared. "He turns three months old this Saturday."

Six days after Mateo was born, they found out he had a hereditary disease called Spinal Muscular Atrophy, or SMA.

"It came back that Matteo was missing this particular gene strand, which meant that he had SMA," Thompson recalled.

The disease is essentially attacking Mateo's nerves and muscles.

"These motor neurons are important. They communicate with the muscles to make them work properly," said Dr. Raymund David, the neuromuscular director at Valley Children's. "So without these motor neurons, activities such as swallowing, breathing, and moving actually get affected."

He said, because of the type of SMA Mateo has, he does qualify for Zolgensma, one of three recently FDA-approve treatments for his condition. However, the path to getting the treatment is a long one.

"We had to do tests on his kidney, his heart and his liver to make sure that his little body could even handle that type of intense treatment," said Thompson. "Since then we've had to do some testing on his antibodies."

While the past two and a half months haven't been easy, the family and Dr. David are happy Mateo's SMA was caught early on due to mandatory newborn screenings, which started in 2020. They're also thankful there are treatment options.

Before 2016, Dr. David said there were none for SMA patients.

"As they grow older, they deteriorate, get weaker, and eventually they die," said Dr. David.

Jocelyn and Marcus said, for their baby boy, it's as if the stars have aligned.

"This gives us the absolute best chance for him to have a normal life and to have the best life he possibly could have," she said.