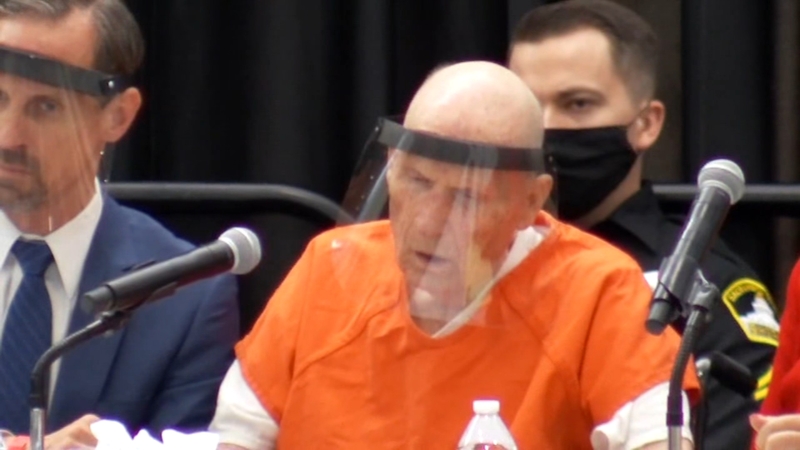 Earlier this summer, Joseph James DeAngelo admitted to the attempted kidnapping of Elizabeth Hupp, and pleaded guilty to murdering her father, Claude Snelling.

Hupp was just 16 years old when her life changed forever and her father's life was taken away - by the man now called the Golden State Killer.

DeAngelo's horrifically violent crime spree started in the South Valley, while he worked as an officer for the Exeter Police Department.

He burglarized more than 100 Visalia homes, earning him the title of the Visalia Ransacker.

But he also set his sights on Hupp, stalking her through her bedroom window, until one night, he tried to kidnap her.

"On September 10th, 1975, I went to bed like any other night without a care in the world," Hupp said in a Sacramento County courtroom on Thursday. "A few hours later, my world was turned upside down. At approximately 2 a.m., I was awakened by an intruder, Joseph DeAngelo, who was wearing a ski mask and pointing a gun at me, saying that he was taking me with him and that if I made any noise, he would kill me."

Snelling, a College of the Sequoias Journalism professor at the time, died on the way to the hospital.
Elizabeth says she felt guilt for many years, wondering if there was anything she could have done to prevent his death.

"It wasn't until I became a parent myself that I realized there was nothing I could have said that would have kept my dad from trying to save me," Hupp said. "My mom always said that it wouldn't have mattered if there were 20 men out there with guns - that wouldn't have stopped him."

Hupp says her father was a man of faith.

He loved his family more than anything, and lived life to the fullest before it was cut short at the age of 45.

"He would have been a wonderful grandpa," Hupp said. "What sickens and angers me the most is that DeAngelo was able to live a normal life with his family for all those years, while my family and I could not be with my dad. I am so thankful that he will at least spend the rest of his miserable life in prison."