Fire crews across the Valley are already seeing an increase in vegetation fires.
KFSN
By Gilbert Magallon and ABC30.com staff 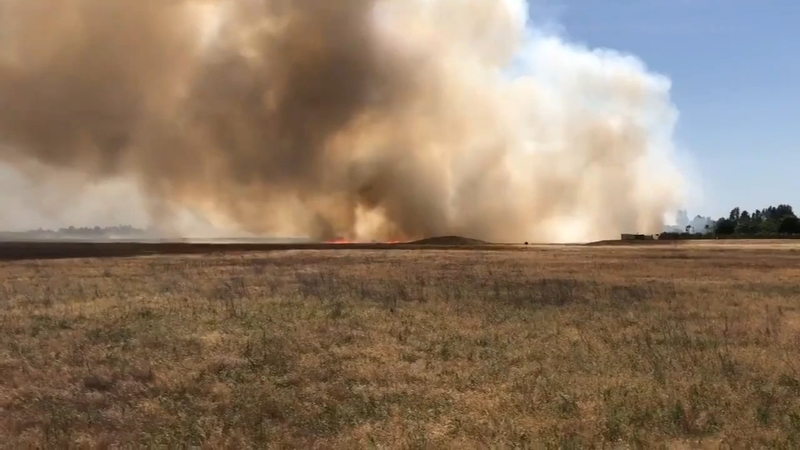 The fast-moving fire destroyed more than 120 acres of dry brush.

BREAKING NEWS: A large grass fire is currently burning in Fresno County near Fowler & Behymer. Winds are quickly pushing the fire. No damages as of right now. At least 20 acres burned so far. @ABC30 pic.twitter.com/I2rFYNamxf

The smoke was visible to residents from miles away, and caused Bud Rank Elementary School to cancel sports activities and send students home.

"A fire has developed west of the school. Out of an abundance of caution, due to smoke, we are cancelling sports today," the school administration wrote in a message to parents.

Here’s a short clip of the back burn operation. @ABC30 pic.twitter.com/vN2EDT4JSh

Fortunately, crews were able to put the fire out before homes were damaged.

A grass fire is sending thick grey smoke into the skies of Clovis, affecting school activities in the area.

It's situations like this that fire crews across the Central Valley fear could have much more dangerous consequences.

He says this is concerning as we approach fire season.

"We are starting to see that vegetation dry out much earlier than we have in years past," he says.

Rosa says they have already responded to at least 300 fires this year.

He dreads that this is a preview of what is to come in the summer months.

"At some point, we are probably going to be taxed pretty good with the amount of the fires we are going to have," Rosa says.

The state is offering fire departments some assistance.

It's already proven beneficial for the Fresno County Fire Department.

"We are able to put firefighters on trucks sooner. We are able to open up some of the stations that may have been closed previously," says battalion chief Dan Urias.

Fire officials are also asking those in the public to do their part.

Remove all dry brush within 100 feet of your home.

In addition, fire officials ask those hauling trailers to make sure their chains are secure, because if they drag on the ground they could spark a fire.

The cause of the fire at Behymer and Fowler is still under investigation.