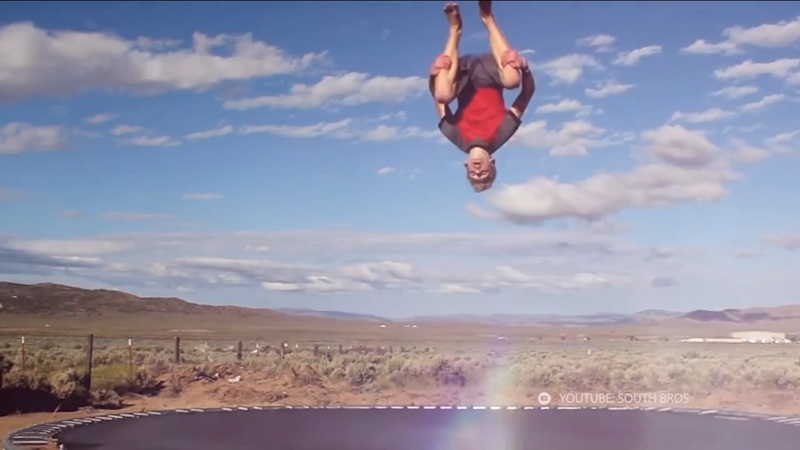 Do you know what Gtramp is?

If you haven't heard of it by now, you probably will soon because it's hard to take your eyes off it! Gtramp stands for "garden trampoline" and it's exploding on social media.

But this isn't your typical kiddy jump and bouce stuff. It involves teens pulling off jaw-dropping acrobatics and gravity-defying moves, moves that are turning 'flippers' like 15-year-old Colby Iverson into a Gtramp superstar on Instagram.

We found more than 76-thousand Gtramp hashtagged posts on Instagram and YouTube's loaded too.

The teens typically master many spins, twists and flips right in their backyards, but posting videos is key to help others learn, or show how a flipper pulled off a new stunt.

They also meet up locally.

The Freestyle Trampoline Association says flippers are "athletes who work together to help each other learn acrobatic skills in their backyards."

"Gtramp is more self-taught. We don't have coaches, we coach ourselves. We have friends filming us constantly," Colby says.

Gtramp has grown so much there are now national and international competitions like the GT Games, hosted by Skybound.

"These guys have been bouncing around in their backyards and in trampoline parks for many years now undiscovered, unnoticed, and we wanted to give them a platform," says Greg Roe, co-founder of the GT Games.

Colby has won several awards and is now sponsored by Alleyoop Trampolines.

His parents never expected he'd become a Gtramp star. His father, Craig Iverson, says, "I'm extremely proud of what he does and how he does it."

And the American Academy of Pediatrics "cautions against home trampoline use."

"The most common injuries that we see are sprains and fractures. The more serious injuries are the head, neck and spinal cord injuries and those can result in permanent neurologic damage or potentially even death," say Sarah Denny, MD, a pediatric emergency medicine physician and spokesperson for the American Academy of Pediatrics.

This video shared with us by Joshua Southworth shows the moment he broke his neck landing on a trampoline. He was rushed into surgery and is still recovering. A GoFundMe account has been set up to help him.

Colby has gotten injured too. Flippers caution, the intricate moves are the result of months of work, and they stress -- if you are going to flip -- don't try it without training, common sense and safety precautions.

"It takes a ton, tons of practicing, tons of work to be able to be at a high level in Gtramp just like any other sport," said Colby.