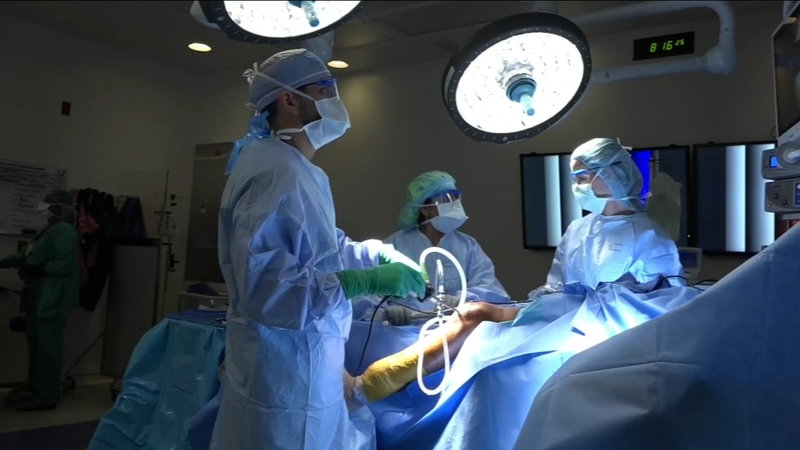 FRESNO, Calif. (KFSN) -- "I like to play soccer, basketball, I like to run a lot," says young Matthew Lefkowitz.

Like most eleven-year-olds, Matthew was super active, until the day he tore his ACL playing soccer.

"It was really painful, I was crying a lot," he said.

In most cases, doctors recommend surgery to reconstruct the ligament that provides crucial stability to the knee. But when it comes to children, it's important to protect

"So you don't injure them, causing one leg to be longer than the other, or even grow at an abnormal angle," says Dr. Jeremy Frank, a pediatric sports medicine surgeon.

That's why Frank is using a specialized technique to rebuild a child's ACL.

"We're taking a strip of tissue from the side of the thigh, that tissue is called the iliotibial band, or IT band," says Frank.

The surgeon then wraps that tissue around the thighbone, through the knee, and stitches it into the top of the shin bone.

"Therefore we're not drilling any holes whatsoever in the bones, and not risking any injury to the growth plate," Frank says.

Of course, Matthew's mom was still worried when her son went in for surgery.

"Would he come out and be able to play and run the same way he always did?" says Nina Lefkowitz.

But a year later Matthew is back on the field!

"I recently just got cleared by Dr. Frank that i don't need any brace anymore to play sports," he says.

He wants other kids not to be scared if they need ACL surgery.

"I feel great, i feel like it never happened," he says.

The recovery is still the same as any ACL procedure: physical therapy for up to five months and light activity like swimming or biking three months after surgery. Most kids

are back to their sport of choice within a year after the injury.
Report a correction or typo
Related topics:
health & fitnesshealthacl
Copyright © 2022 KFSN-TV. All Rights Reserved.
HEALTH
Got dry winter skin and chapped lips? Here's how you can find relief
Supreme Court halts COVID-19 vaccine rule for US businesses
Fresno State requiring surgical-grade or KN95 masks on campus
Digital eye strain: Why you may have it and what you can do about it
TOP STORIES
Man suffered severe burns after explosion at Table Mountain Casino
Domestic violence suspect arrested after standoff with Fresno police
Man accused of killing 2 in Fresno County booked in LA County jail
Body of Missy Hernandez recovered from aqueduct near Huron
All 3 suspects arrested in connection to Tulare County murder
Man guilty for killing Kerman couple must wait for new trial decision
Will inflation continue to rise? We talked to a local expert
Show More
Central CA Food Bank facing shortages with supplies, volunteers
Teen killed, another injured in shooting in Orange Cove
At-home COVID-19 test request website goes live 1 day early
1 killed in crash in Madera, Yosemite Ave closed for investigation
Man shot after fight with brother in Madera, suspect in custody
More TOP STORIES News