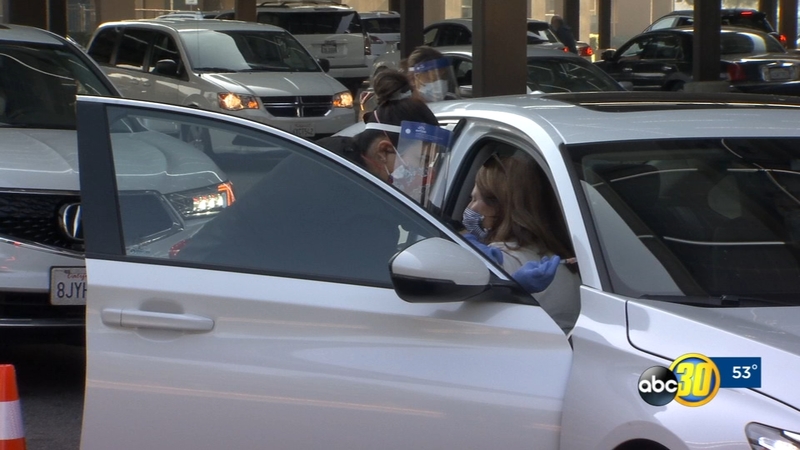 COVID vaccine lines get longer in Valley as supplies dwindle

TULARE COUNTY, Calif. (KFSN) -- Patients are waiting in long lines to get a dose of the COVID-19 vaccine, but as supply dwindles, it may take longer before every Californian gets a shot.

Carrie Monteiro with the Tulare County Public Health department says they're working to vaccinate as many people over the age of 65 as they can, but there's simply not enough vaccines.

"We don't have enough supply to meet the overwhelming demand," she says. "We have to not only balance the first dose, but the second dose, which is why we've had to slow down future clinics of first doses."

In Madera County, it's the same problem.

Madera County received a large allocation at first. Over time those have dwindled. They're now at a place where doses were 2,000 for the county.

According to the ABC data journalism team, California lags behind in the country, with just about 4% of the population over the age of sixteen being administered the first dose, putting the state at 49th out of 50 states, along with Washington D.C. and Puerto Rico.

Action News reached out to the state regarding the slow rollout.

They tell us 1.6 million vaccines have been administered out of 4.2 million distributed.

Some limitations include data log issues, patients making appointments but having yet to get the vaccine, and local county health offices reserving doses to be able to administer a second shot.

Mariposa County health officials say they've used about 50% of their doses, but along with state database issues, they have to keep some doses on hold for now.

Madera County board chair Robert Poythress believes the issue is both supply and other areas getting more doses.