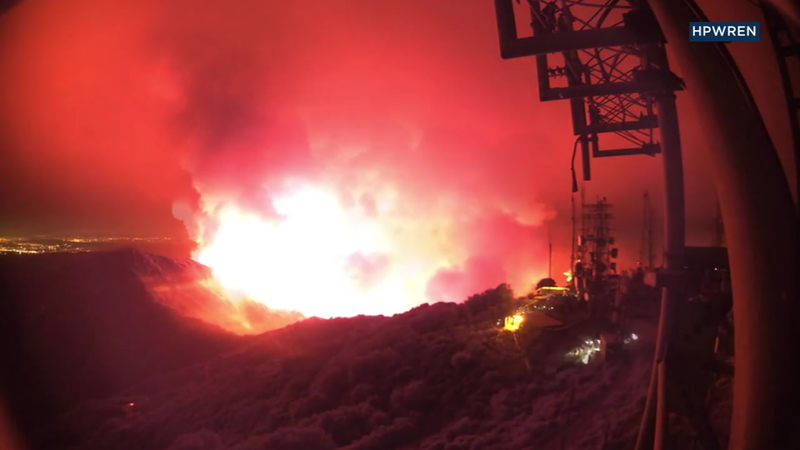 TRABUCO CANYON, Calif. -- Fire officials on Saturday announced that containment of the massive Holy Fire has more than tripled from 10 percent to 36 percent, offering a glimmer of hope to residents of Riverside and Orange counties even as thousands of homes remained threatened.

The wildfire's acreage inched upward to 22,158 with more than 1,500 firefighters on the front lines of the inferno in the Cleveland National Forest.

As the fire entered its sixth day, helicopters and airplanes continued to drop fire retardant on flames burning in otherwise inaccessible terrain. In some neighborhoods, entire blocks were covered with red Phos-Chek.

Thursday can be seen turning to Friday as the flames and smoke continue to engulf the land and sky near the Lake Elsinore-Corona line.

More than 21,400 people were originally under evacuation orders, though many in Lake Elsinore and other areas remained behind in an effort to defend their homes. Others fled to safety.

"Worst case scenario -- we would lose our home that we just moved in to," said Sycamore Creek resident Denise Artukovich. "So we grabbed the hard drive on the computer -- because pictures are irreplaceable -- and grabbed the kids and the dog."

The bones of a car destroyed in the #HolyFire in Horsethief Canyon. Flames got incredibly close to homes in this area. @ABC7 #fire #california #firefighters #flamea #abc7eyewitness pic.twitter.com/sAEYIJRgWZ

"We promise you and my commitment to you is that as soon as we feel it is safe from any additional fire activity, we will give you back your homes, and we're actively doing that for all of our communities. We're constantly assessing that," a Cal Fire official told community members.