Fresno Fire and police teaming up to combat illegal fireworks 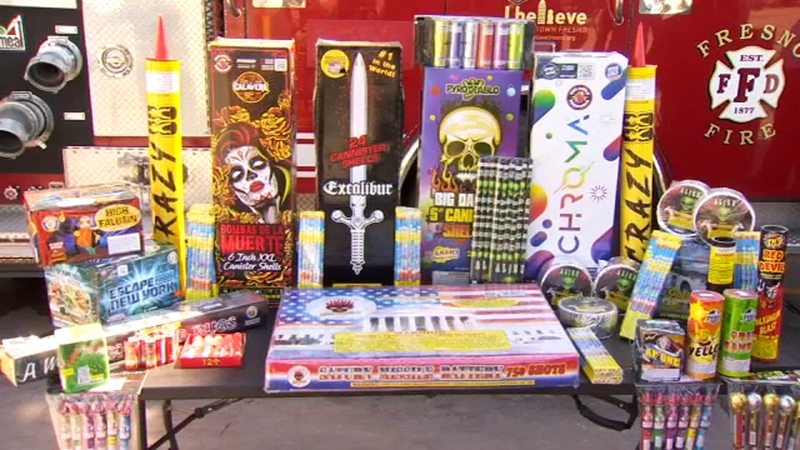 Fresno fire and police teaming up to combat illegal fireworks

FRESNO, Calif. (KFSN) -- The Central Valley is in a drought, which officials say makes this an especially dangerous time to light illegal fireworks.

The City of Fresno's police and fire departments are teaming up by putting together a task force. It consists of specialized and undercover units focusing on fireworks in the evenings and on weekends.

"During a time when there's a lot of violent crime and the fire department is responding to a lot of fires, we had to do something," says Fresno Police Chief Paco Balderrama.

In 2020, the fire department had 135 calls on the Fourth of July alone just for fire-related emergencies.

This year, the police department has responded to 358 calls and has issued 20 citations.

In the last 24 hours, the undercover units recovered 250 pounds of illegal fireworks and they made two felony arrests.

Balderrama says fines are up to $1,250 and violators can face charges for arson or the sale of illegal fireworks.

Fire officials say a legal firework package needs to be labeled "safe and sane" from the state fire marshal to be used in the city legally.

Even when using those, officials say you need to have a water bucket or hose next to you and it should be in the middle of a street or cul-de-sac, away from flammable materials. An adult also needs to present at all times.

Because the departments are getting thousands of calls, they recommend you to report any illegal incidents through the FresGO app.

"I mean, it's a firecracker," says Town House Motel Manager Jason Narang. "How much fun can you really have with it?"

"This is not something that you want to play with," he said. "It's not a game out there, it's not. You want to have the fun, but don't have the fun at the expense of other people."