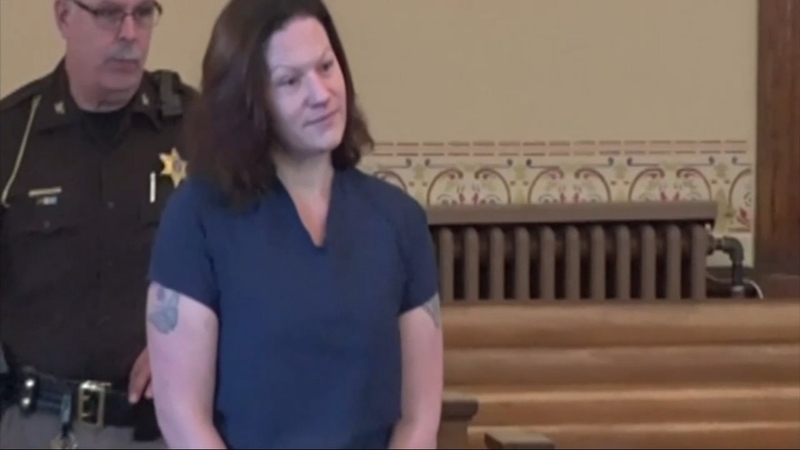 HOBART, Ind. -- A new documentary claims an Indiana woman already convicted of two murders may be a serial killer. Kelly Cochran is already serving a sentence for two murders.

Detectives in Hobart pointed out that the most salacious details of the Investigation Discovery documentary are just allegations and have never been proven.

Cochran, 35, will never walk free again, having been convicted of killing her lover and then her husband. Her story generated headlines in Indiana and Michigan for two years. She is the subject of a new book and an about-to-be-released documentary.

But it was the tireless work of now-retired Hobart detective Jeremy Ogden who Cochran confessed o after months of mind games in May 2016.

"Her and her husband entered into an agreement on her wedding night that if one had an affair on the other, that it was their responsibility to kill the person they'd had an affair with. If they failed in that, they could kill the other," Ogden said.

Chris Regan went missing in Michigan's Upper Peninsula in October 2014 and the investigation quickly went nowhere. Cochran and her husband Jason had been questioned in his disappearance, but not arrested.

It was not until 18 months later, shortly after the couple moved back to Northwest Indiana and Jason Cochran died from an apparent heroin overdose, that the pieces fell into place. His death was later ruled a homicide by strangulation.

Cochran admitted to having an affair with Regan, who she said her now-dead husband killed and then, with her help, dismembered. She even led investigators to where they dumped the remains. She was convicted in Michigan of his murder.

But the upcoming documentary implies that Cochran might be a serial killer with up to nine other, yet unidentified victims still out there.

"I wouldn't put a number on it, but I would say I'm pretty positive there are others," Ogden said. "She's a very calculating, manipulative killer."

Cochran entered a guilty plea for the murder of her husband in April under the condition that she could not be prosecuted for other murders. Prosecutors struck that deal in hopes she would lead them to other victims connected to other cold cases.
Report a correction or typo
Related topics:
michiganmurderu.s. & worldserial killercold case
Copyright © 2021 WLS-TV. All Rights Reserved.
U.S. & WORLD
Mattel: Toy prices to rise this holiday season
Fauci warns 'things are going to get worse' with COVID
Olympic high jumpers agree to share gold medal
Florida breaks record for COVID-19 hospitalizations
TOP STORIES
Pedestrian hit and killed on Hwy 99 in Fresno for second day in a row
Woman killed in Tulare Co., 'armed and dangerous' suspect on run
Fresno State football tickets are now on sale
UPDATE: Fresno mom shot in front of 6-yr-old daughter dies in hospital
Man shot to death in southwest Fresno
Bee swarm attack kills man, injures 5 in Arizona
COVID surge for unvaccinated people is only beginning, experts warn
Show More
3 killed in multi-vehicle crash in Tulare County
Police investigating deadly shooting in southeast Fresno
Fresno's Tower District gets biggest makeover in 60 years
Man killed, 16-year-old boy injured in Fresno County homicide
Bacon may disappear in California as pig rules take effect
More TOP STORIES News