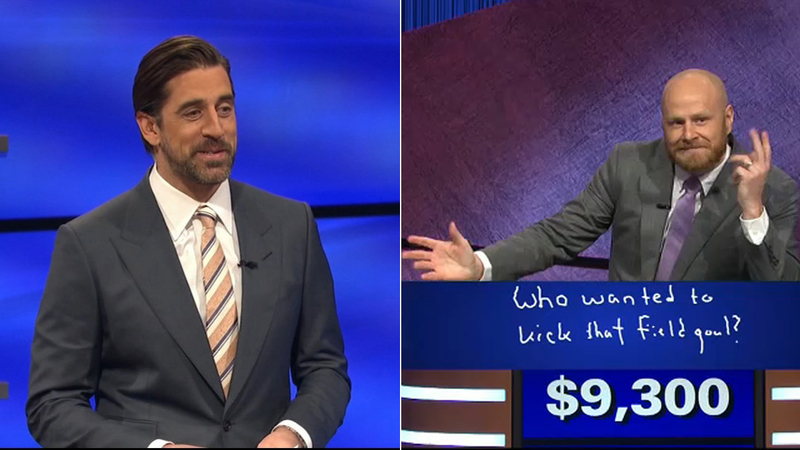 LOS ANGELES -- A trick play of sorts stunned Green Bay Packers quarterback Aaron Rodgers, not on the football field this time, but on the set of "Jeopardy!"

Monday was the first episode of Rodgers' stint as guest host on the game show.

During the "Final Jeopardy" round, returning champion Scott Shewfelt, a writer originally from Ontario, Canada, decided to have a little fun with the three-time NFL MVP.

The category was Daytime TV Personalities.

Accepting a lifetime achievement Emmy, he said "Just take...10 seconds to think of the people who have helped you become who you are"

Who wanted to kick that field goal?

After Rodgers read the response aloud, the audience erupted into laughter.

Scott's question references the Packers' controversial decision to kick a field goal when they were down 31-23 to the Tampa Bay Buccaneers during the last two minutes of the NFC Championship Game in January instead of going for a touchdown.

The decision ultimately cost the Packers a trip to the Super Bowl. The Bucs won the game 31-26.

Rodgers, who himself gave a laugh while reading the question and then had a smirk on his face, took a moment to compose himself and told Scott, "That is a great question. It should be correct, but unfortunately for this game today that's incorrect."

Scott didn't lose any money, though, as he wagered $0.

The correct response was Mr. Rogers which contestant Brandon Deutsch, a student from California, wrote down.