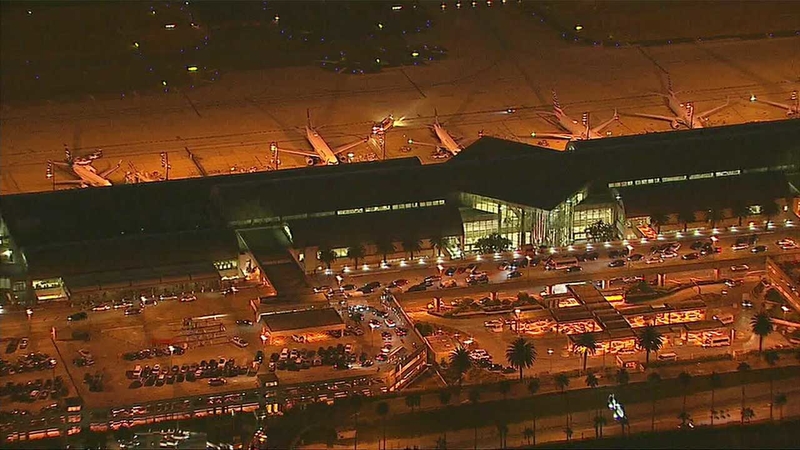 10,500 in OC remain without power; flights resume at airport

SANTA ANA, Calif. -- A fire at an electrical substation in Orange County caused a power outage that left 28,000 customers in Irvine without power and temporarily grounded all flights at John Wayne Airport, officials said.

Crews were working to restore power.

The outage knocked out power for all three terminals at John Wayne Airport and prompted all inbound flights to be diverted.

The airport reported a full ground stop in a tweet shortly after 7 p.m.

John Wayne Airport is open for all commercial flights today. Please check with your airline regarding any potential flight delays.

Orange County Fire Authority responded to the area of Jamboree Road and Michaelson Drive, where they extinguished the vault fire that led to the outage.

[IRVINE, CA] #OCFA is currently in UNIFIED COMMAND with #irvinepd & #sce for a vault fire near Jamboree & Michaelson. This same vault fire may have caused the power outage at #johnwayneairport OCFA is also assisting JWA. For more details, contact JWA PIO. pic.twitter.com/bQR9sFZbMD

Power to terminals slowly started to come back on around 9 p.m. but an airport spokesperson said there would be no more departures and planned on resuming operations by 7 a.m. Saturday.

Guests who were supposed to pick up passengers are advised to call the airline to get information on where diverted flights would be landing.

A "care and reception facility" was initially set up at Northwood High School those in need of shelter during the power outage. That facility was later moved to Northwood Community Park at 4531 Bryan Ave. All Irvine community centers were serving as cooling centers.

At 6:40 a.m. Saturday, the airport announced it was open for all commercial flights.

The Care and Reception facility set up due to the power outage has been moved to Northwood Community Park, 4531 Bryan Ave. Hours are 9 a.m. to 6 p.m. All City of Irvine community centers are cooling centers. https://t.co/m1lBPK3qQQ for details. pic.twitter.com/MMNpiMYRW3