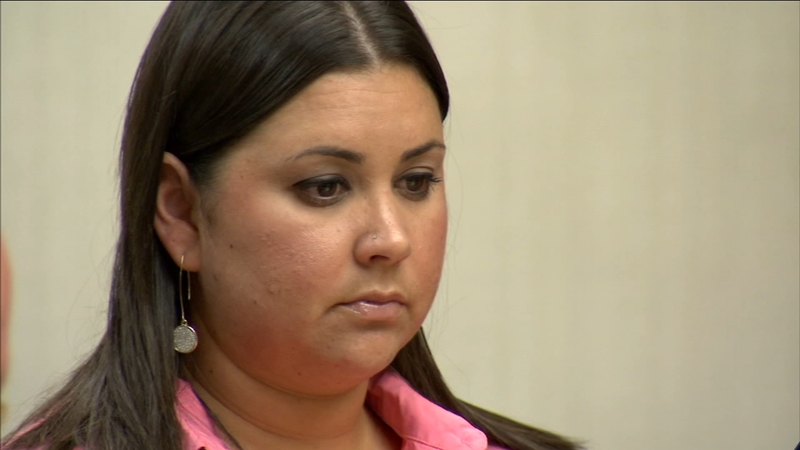 FRESNO, Calif. (KFSN) -- UPDATE - On Friday, Day 2 of the trial, the alleged victim testified that he and the former Fresno Unified middle school teacher engaged in oral sex several dozen times inside a classroom.

Justine Nelson took notes and listened while her defense cross examined her accuser on the stand.

No cameras were allowed in the courtroom but veteran defense attorney Roger Nuttall tried poking holes in the alleged victim's testimony.

The boy responded:
"I don't know, it's too hard to remember."

The defense followed up with:
"What you said to officers was entirely different than what you said in court. Isn't that true?"

The teenager claims he doesn't remember certain times and dates and was nervous when speaking to police.

The defense is trying to create doubt in the boy's testimony and convince the jury that he forced himself on the teacher.

Text messages reveal the boy asked the defendant to send him nude pictures on several occasions -- prompting the defense to ask:

"In text messaging you started making explicit demands of her?"

A report on Day 1 of the trial on Thursday follows

Justine Nelson allegedly committed sex acts on the boy almost three years ago when she was a teacher at Tenaya Middle school and he was an eighth-grader.

A stunning case of alleged sex abuse began on Thursday in a Fresno courtroom.

A Fresno Unified teacher is accused of having sexual relations with an eighth-grade boy.

The alleged victim testified on Thursday that the two had a months-long relationship - one that started with text messaging.

Prosecutors tried to establish that Justine Nelson's sexual encounters with the boy started before he turned 14 years old.

Nelson is facing serious charges that she committed sex acts on the boy almost three years ago when she was a teacher at Tenaya Middle school.

Cameras were not allowed in the courtroom, but detectives say nude pictures of Nelson popped up on social media which prompted the investigation.

The minor, who allegedly posted the pictures, didn't even have Nelson as a teacher but told a jury Thursday that she initiated the relationship.

"She texted I was cute and wanted me to kiss her. I was shocked; I didn't know what to do," he said.

From there the relationship progressed to kissing and then more.

Investigators said the boy remembered being 13 years old when they had their first sexual contact.

"Between second and third period we had oral sex. We started kissing and she pulled my pants down."

And when the boy was late to his next class - Nelson covered for him the same way she would following several future encounters between the two.

"I was late to class so she wrote me a pass."

The now 16-year-old says the 31-year old would frequently buy him lunch and even gave him money for an out-of-town trip once. The two would spend their lunch together in her classroom with the door locked

"During lunch or whatever I would go to her classroom and she would tell other kids to not come in so we could be alone."

Nelson would like the jury to believe that the teenager forced himself on her, but according to him, he was afraid.

If prosecutors can prove that the boy was 13 when the relationship started, Justine Nelson faces up to 14 years in prison.