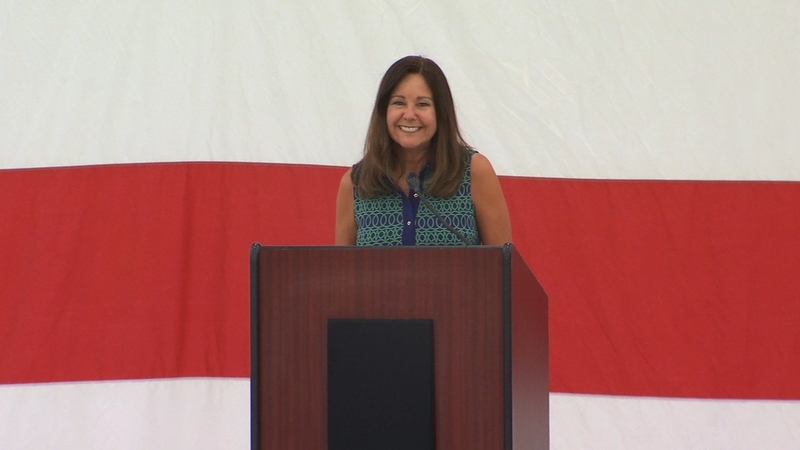 LEMOORE, Calif. (KFSN) -- Vice President Mike Pence was joined on this trip to the Valley by his wife Karen.

One of Karen Pence's priorities has been to help military spouses find jobs with businesses and the federal government.

While her husband talked US trade, Mrs. Pence came to thank military families for their sacrifices.

The Second Lady wasted no time connecting with the military spouses who gathered inside the VFA-125 hangar which houses F-35C fighter jets at Lemoore Naval Air Station.

"Our daughter is dating a Super Hornet pilot and he could get stationed here," said the Second Lady.

Pence came to strike fighter country to tell the spouses they were the backbone of the US military.

Those in attendance appreciated the support.

"We are very honored that she has come to NAS Lemoore, put us back on the map and actually recognized all the hard work military spouses endure," said attendee Carlie McCoy.

All of the guests were able to snap a photo with Mrs. Pence. They also received bracelets with her name on them.

Pence said service members and spouses can be reimbursed for re-licensing and re-certification costs when they move.

"I'm a lawyer so having to get licensed in every state we're in is difficult. I really appreciated the fact that she came out here and talked about the issues specific to military spouses. I myself am a Democrat," said Casey Fisher.

Pence told the men and women Linked In premium access was free for a year for service members and their spouses.

Mrs. Pence added SBA loans were also available for those running a business.