KABC
By Leanne Suter
WHITTIER, Calif. -- A Whittier police officer was killed and another was wounded when they were fired upon while responding to a traffic accident Monday morning, authorities said.

Los Angeles County sheriff's officials said a suspect rear-ended a couple of cars on Colima Road in the city's Friendly Hills neighborhood at about 8 a.m.

The suspect then asked one of the drivers involved in the wreck to help push his car around the corner to Mar Vista Street.

When the two Whittier officers arrived on scene, one of the drivers involved in the accident told the officers that the suspect responsible for the wreck was around the corner.

The officers, later identified as officers Keith Boyer and Patrick Hazel, walked over to the suspect, who was sitting in a car, which was reportedly stolen from East Los Angeles.

LASD Lt. John Corina described the suspect as a known gang member who had tattoos on his face and neck and was wearing "gang attire."

Corina said the officers got the suspect out of the vehicle and were in the process of patting him down for possible weapons.

That's when the suspect opened fire with an automatic handgun, striking both officers, according to officials. At least one of the officers returned fire, hitting the suspect.

"I heard the shots, and I couldn't believe they were shots," witness Anita Lopez said. "They were very loud."

Both officers and the suspect were rushed to area hospitals. Boyer, a full-time member of the force since 1990, was pronounced dead at the hospital.

Hazel, a member of the force for three years, was listed in stable condition in the intensive care unit. Police said Hazel was expected to survive his injuries.

Boyer's body was escorted via motorcade from UC Irvine Medical Center to the Orange County Coroner's Office in Santa Ana.

A Whittier police officer was killed in a shootout with a suspect while responding to a car crash, authorities stated.

A long line of law enforcement officials saluted the officer's flag-draped body as it was wheeled into the coroner's office.

The suspect, who hasn't been identified by officials, was also in stable condition at the hospital. Authorities said the suspect was expected to survive his injuries and that his semi-automatic handgun was recovered at the scene.

Further investigation revealed that the suspect was believed to be involved in a City Terrace murder earlier in the morning, according to police. Authorities stated the shooting death happened in the 1400 block of Voleny Drive at about 5:30 a.m.

The victim was Roy Torres, a cousin of the suspect, officials confirmed. The vehicle the suspect was driving at the time of the crash was stolen from murder scene, according to authorities.

Police said the officers responding to the crash scene were not aware of the murder or that the vehicle was stolen. 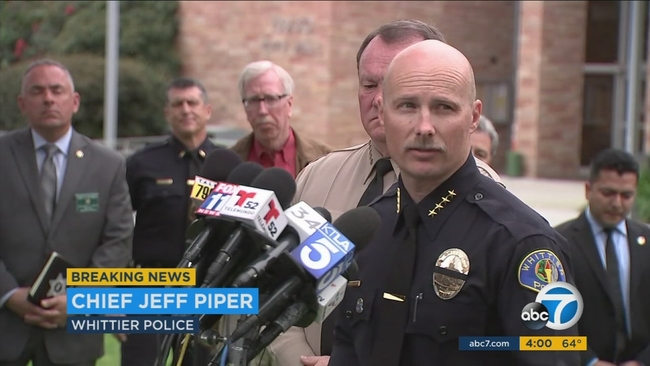