Larry Elder tours homeless encampment in Venice, but leaves due to angry crowd 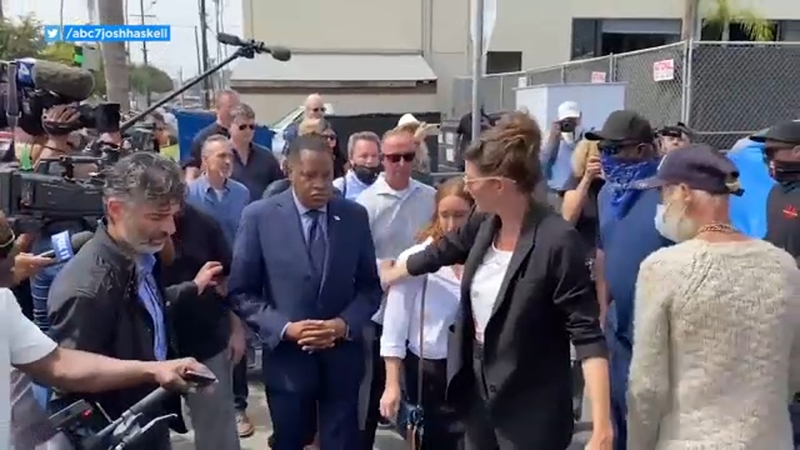 Larry Elder had to cut his campaign event short in Venice after he encountered an angry crowd and had an egg thrown at him.

Elder was in Southern California Wednesday as he continued his campaign ahead of next week's recall election. He is currently leading in the polls among the 46 candidates running to replace Gov. Gavin Newsom.

Elder spent the morning in the Fairfax District voting before boarding his new campaign bus to take him to Venice.

"I am by far the leading candidate on the replacement side. I think I bring energy ... enthusiasm. I'm not sure how far this recall election would have gone had Larry Elder not entered into it," he said.

But when Elder arrived in Venice to tour a homeless encampment, we were there when those who live at the encampment at Sunset and 3rd weren't pleased to see the Republican candidate for governor, shouting at the conservative radio talk show host. An egg was thrown at Elder by a woman wearing a gorilla mask, but the egg did not strike him. She also tried to punch a member of his staff.

Another man also attacked that staff member, punching him in the back of the head.

#HappeningNow - the homeless who live on Hampton and 3rd Ave in #venice don’t seem happy to see @larryelder - some are shouting at him to leave and now following him as he tours an encampment @ABC7 pic.twitter.com/CLMVwKskES

The tour was cut short, and Elder was escorted to a waiting vehicle, taken away by his security to another location in Venice.

Later, Elder tweeted that in the morning someone also fired a pellet gun at his security detail. LAPD confirms it is looking into a report that a driver and security team member for Elder were struck but not seriously injured around 10:45 a.m. on Melrose Avenue.

Afterwards, Elder told us he wasn't concerned for his safety.

"People are angry. People are furious. People are mentally ill. This problem needs to be fixed, and Gavin Newsom has made it worse," he said.

In the Bay area, Elder was a target for Newsom, who rallied supporters alongside Vice President Kamala Harris.

"They think if they can win in California, they can do this anywhere. Well, we will show them you're not going to get this done, not here, never," Harris said during a rally.

The recall has even gotten the attention of former President Barack Obama, who released an ad Wednesday supporting Newsom.