WASHINGTON -- When House Republicans gathered on the baseball field Friday morning for their weekly practice, members were abuzz about one topic: Rep. Madison Cawthorn.

The North Carolina Republican infuriated members of his own party this week for calling Ukrainian President Volodymyr Zelenskyy a "thug" and the Ukrainian government "incredibly evil" -- comments that surfaced just days before Zelenskyy made a passionate plea to Congress on Wednesday for more help in defending Ukraine against Russia's bloody assault on the country.

"It was the talk of baseball practice today," Rep. Roger Williams, a Texas Republican who coaches the GOP baseball team, told CNN. "It's not the time to toss accusations around like that ... What I would just say is, I wish he hadn't said it. That was the general sentiment (at practice.)"

Rep. Tom Rice of South Carolina, who has not been shy about calling out his colleagues after voting to impeach former President Donald Trump last year, was even more pointed in his criticism.

"Madison Cawthorn has said he is here for PR and not legislating. I don't think he's a serious legislator," Rice told CNN. "I think he's more interested in throwing bombs than he is in actually trying to help the country."

"I don't think he has very much respect for the Republican conference or anywhere else," he added. "He's living in a dream land."

Cawthorn's latest comments have put GOP leaders in an awkward spot -- just as they're trying to show a unified front against Russia and paint President Joe Biden as weak against Russian President Vladimir Putin. The remarks from a freshman firebrand with the ear of former President Donald Trump risks undermining their anti-Russia position, and critics have seized on Cawthorn's most recent behavior to accuse the GOP of echoing Kremlin talking points and acting sympathetic toward Putin.

Now, lawmakers from across the conference -- including members of Republican leadership -- are dumping criticism on Cawthorn and racing to distance themselves from his remarks.

"Madison is wrong, if there's any thug in this world it's Putin," House Minority Leader Kevin McCarthy said at his weekly news conference on Friday, though he said he's still supporting Cawthorn's reelection bid. "You just watched Putin directing Russia bomb a maternity ward. We watched yesterday in a theater that's identified in the front and the back from the air that you're housing children -- bombed. This is atrocious, this is wrong, this is the aggressor, this is the one that needs to end this war. This is the one that everybody should unite against."

Asked if Cawthorn is a productive member of the conference, Emmer didn't answer directly.

"I'm not gonna comment on this," Emmer added. "I'm focused on one thing and that is winning back the majority and making sure that we stay focused on the issues that matter."

But Cawthorn hasn't always been easy for his colleagues to ignore. Since arriving in Congress last year, the 26-year-old has drawn unwanted attention to his party for his controversial antics, from leading the charge to overturn the 2020 election results to more recently cleaning his gun during a virtual hearing on veterans' health. On the campaign trail, he found himself in hot water for an Instagram post from 2017 showing him visiting Adolf Hitler's vacation house in Germany and describing it as a "bucket list" item. And now a federal appeals court is expected to decide soon whether to revive a longshot challenge against his congressional candidacy, which revolves around whether the Constitution's ban on insurrectionists holding office should apply to him.

Cawthorn's office has sought to tamp down the backlash over his Zelenskyy "thug" comments, explaining in a statement that the congressman was just trying to warn the US against getting drawn into another overseas conflict.

"The Congressman was expressing his displeasure at how foreign leaders, including Zelenskyy, had recently used false propaganda to entice America into becoming involved in an overseas conflict," Cawthorn's spokesman said. "He supports Ukraine and the Ukrainian President's efforts to defend their country against Russian aggression, but does not want America drawn into another conflict through emotional manipulation."

Cawthorn isn't the only Republican creating Russia-related headaches for the GOP. Cawthorn was one of 15 Republicans who voted against a bill to ban Russian oil imports last week, while eight Republicans opposed legislation this week to revoke normal trade relations with Russia and Belarus. Meanwhile, freshman Rep. Marjorie Taylor Greene of Georgia, who voted against a massive spending bill that contained $13.6 billion in Ukraine aid, recently accused the Biden administration of funding "NATO Nazis." And last month, Trump described Putin as a "genius" and "savvy" for his invasion of Ukraine.

"I think that there are people in the Republican Party who seem to be enamored with autocrats like Putin. I think it's disgraceful," said Rep. Liz Cheney, a Wyoming Republican on the outs with her conference over her vocal criticism of Trump. "I think that when you have people like Madison Cawthorn, Marjorie Taylor Greene, others like the former President, who have complimented Putin, particularly at this moment, when we're seeing that he's a war criminal, we're seeing the brutality -- there's no excuse for people being confused about which side we should be on."

While Cheney often finds herself on an island in the GOP when it comes to condemning the Trump-wing of the party, there were plenty of other Republicans who expressed displeasure with Cawthorn's "thug" remarks on Friday.

Rep. Steve Womack, an Arkansas Republican, said it was "not a defensible comment" and wouldn't say whether he viewed Cawthorn as a productive member of the conference.

Rep. Michael McCaul of Texas, the top Republican on the House Foreign Affairs Committee, rolled his eyes and laughed when asked about Cawthorn's remarks, before comparing Zelenskyy to a modern-day Winston Churchill.

And Rep. Don Bacon of Nebraska, who represents a Biden-won district, said Cawthorn's views do not reflect the majority of the GOP conference.

"I disagree," Bacon said. "Zelenskyy has been a tremendous leader. ... Ukraine is the victim."

Across the Capitol, Cawthorn's home state Sen. Thom Tillis took a jab at Cawthorn by highlighting reports that Russian TV has been playing Cawthorn's comments on repeat.

"If your comments are being replayed over and over by Russian state propaganda outlets ..." Tillis tweeted from his official account.

SEE ALSO | Republican donors line up behind US Rep. Liz Cheney: 'We are moving beyond Donald Trump'

North Carolina Republican House candidate Michele Woodhouse, who's running against Cawthorn after supporting him in 2020, told CNN on Friday that people in the district were "really upset" about Cawthorn's "deplorable comments."

Woodhouse claims that if Cawthorn wins the primary, he could put the seat at risk despite the Republican advantage in the district. She noted that Cawthorn's anti-Ukraine comments came as the Congressman was charged with driving with a revoked license and dealing with other traffic citations.

"What I hear on the ground is they just don't feel proud of who's there representing them," Woodhouse said.

Some Republican members, however, avoided criticizing Cawthorn on Friday.

"You'd have to talk to him about it," Rep. Chip Roy of Texas, a member of the hardline Freedom Caucus, said of his colleague's remarks. "I don't keep up with everything every one of my colleagues says. But, look, I just think we ought to be very clear about the atrocities, what Putin is doing and we ought to try to help (Ukraine)."

Freshman Rep. Nancy Mace, a South Carolina Republican who is facing a Trump-backed primary challenge, said when asked about the "thug" remarks: "These are serious times and it calls for serious leadership and that's where my focus is."

"Look, everybody's allowed their opinion here to believe what they want to believe about you or me, or Pelosi or Biden or Trump or anybody else, and Zelenskyy included. Madison's entitled to his opinion," Mast said.

But Mast added of Zelenskyy: "I don't think he's a thug. I think he's been a great leader." 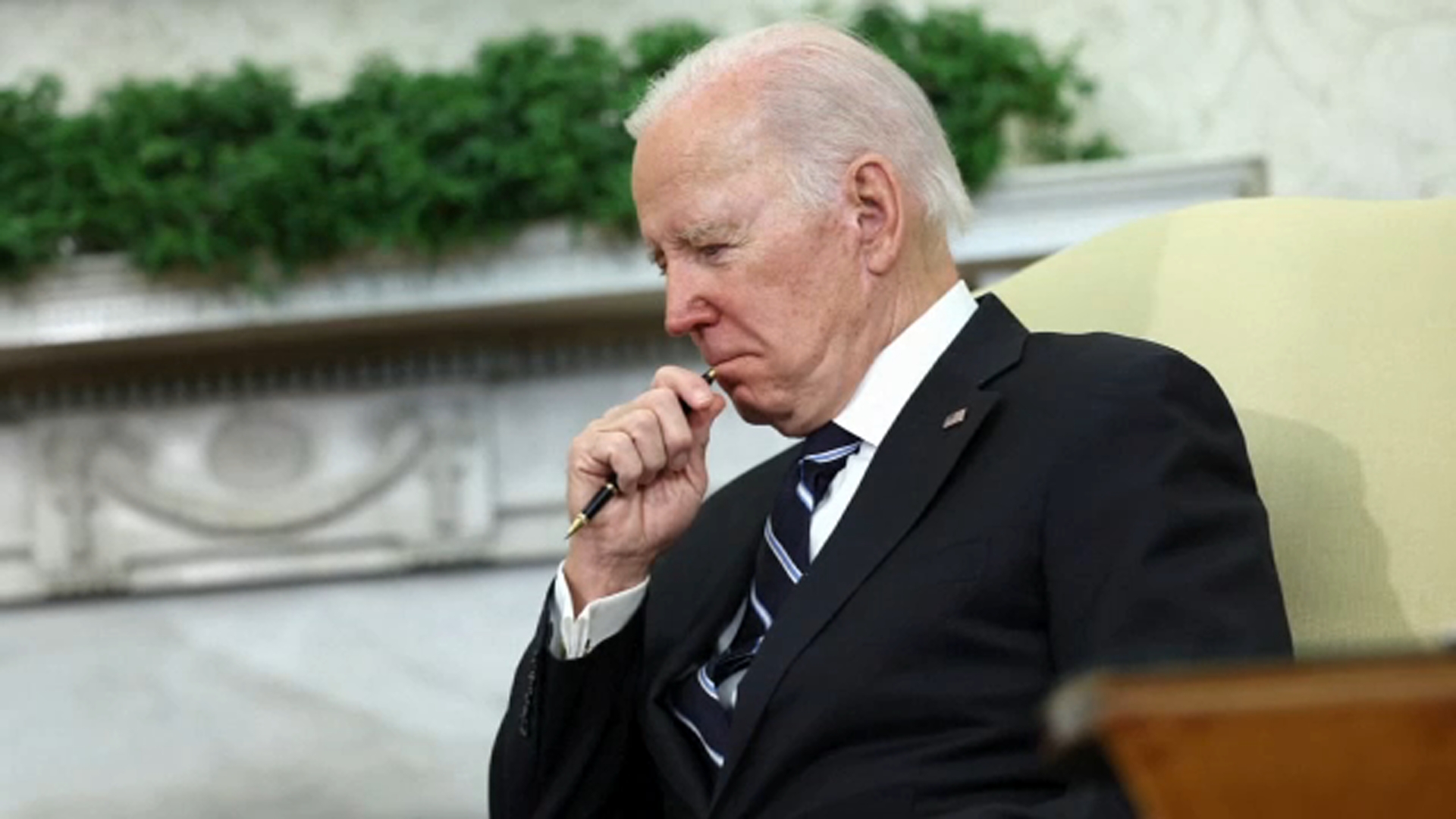