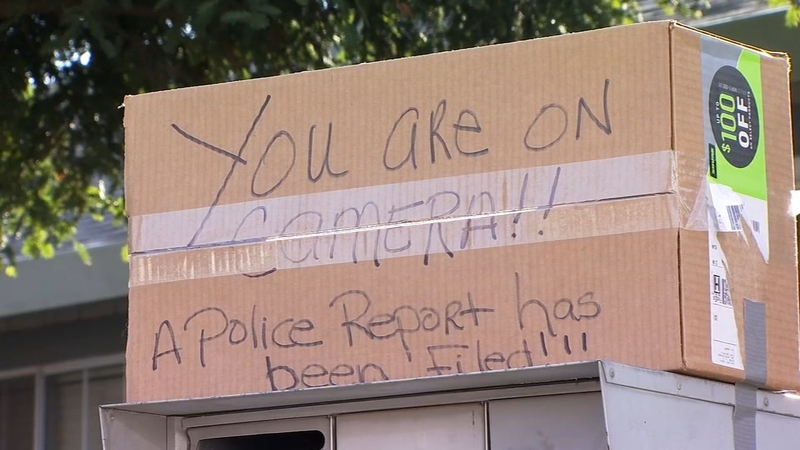 MERCED, Calif. (KFSN) -- Authorities are investigating a series of mail theft cases throughout the Merced area, including some that were caught on-camera.

Neighbors say they're frustrated because thieves have broken into the same locked community boxes multiple times, leaving hundreds of people without their mail this holiday season.

Neighbors say this mailbox in north Merced has been hit by thieves three times in the past 10 days.

The crimes were all caught on camera and appear to show the same car.

The first two cases happened December 2nd and 4th around 3 am, but the most recent was on Sunday just after 7:30 am.

You can see two suspects breaking into the box in broad daylight.

Several others in this area have also been hit multiple times in recent weeks, affecting hundreds of people who use these cluster boxes.

"It first happened last Friday, and I noticed it at 8 in the morning when I was taking my kids to school. I glanced over and noticed the back of the mailbox was popped open so I walked over, and I saw that every single piece of mail was taken out of our mailbox," said mail theft victim Courtney Vincent.

Vincent says the same thing happened again on Tuesday. She and her husband own a tree service, so she's especially concerned about their business mail.

"That's a big thing to have customers send all their information to us, and it's me calling the customers saying did you send your check or this information so it's been really rough," said Vincent.

Some of the neighbors who have had their boxes broken into multiple times are now hoping the postal service will replace their older style mailboxes with this newer style. It has a solid back that can't be pried open so easily.

"It's about time something is done because twice in one week is too much," said Vincent.

Victims we spoke with say they've filed police reports and provided surveillance images and a license plate number in hopes of helping catch the crooks.

A deputy spotted her walking on Giannini Road on Wednesday and recognized her from her previous arrest.

"On this female, Jessica King, he located several pieces of mail from businesses and residents in the area," said Merced County Sheriff's Office Lieutenant Aaron Rosenberg.

King was booked into jail but bailed out the same day because mail theft in California is only a misdemeanor, although it can be charged by federal prosecutors.

Authorities say residents can help protect their property by having boxes that lock, picking up mail right away and tracking deliveries.

"The other thing you can do is sign up for the postal services informed delivery service, and with that service they actually scan every incoming piece of mail and you're notified on your phone or tablet or computer," said Lt. Rosenberg.

A spokesperson for the postal service inspection division says victims can report mail theft crimes 24-7 by calling their tip line.