How a U.S. Marine veteran fell in love with beekeeping 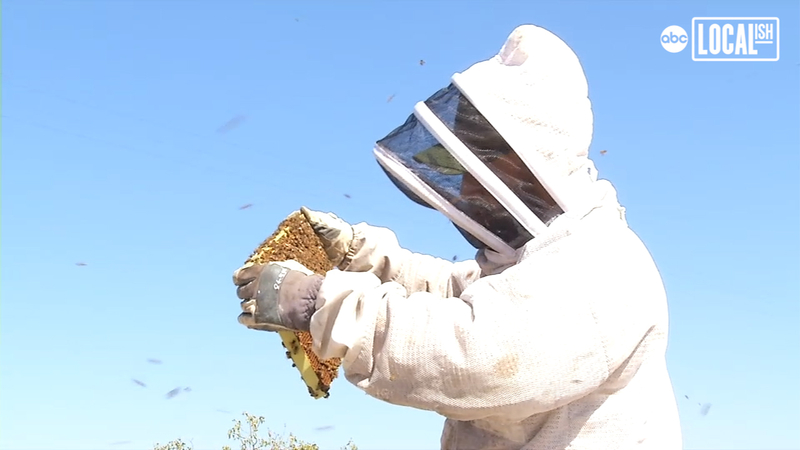 How a U.S. Marine veteran fell in love with beekeeping

MADERA, Calif. -- "The first time I opened up my hive, I think I was hooked. I knew I was going to be a beekeeper for the long run," says Jesus Toro.

From working on farms as a child to serving as a U.S. Marine and now to working in agriculture once again, life has come full circle for Toro.

But he wouldn't have it any other way.

Toro was stationed at U.S. Marine Base Camp Pendleton as a helicopter mechanic for more than four years, and loved his time in the service. But when his daughter was born, he decided to go to college to give her a better life.

It was when he was pursuing a degree in Plant Science at California State University, Fresno, that he got the opportunity to take a class on beekeeping - and immediately felt a sense of calm the first time he heard them. You could say it was love at first buzz.

"What's not to love?" he laugh. "I love that thay're very independent creatures. Even if we didn't take care of them, they would find a way to survive. They're very resilient creatures."

He decided to start his own beekeeping business, but it required a sizeable investment in gear and equipment.

Fortunately, he had some help from The Farmer Veteran Coalition, which helped him buy a trailer to transport his bees. The coalition has given grants to 100 veteran farmers in the past year alone to help their businesses.

Toro and his bees travel from farm to farm, pollinating crops. His business had a rocky start as he learned the ropes of beekeeping.

"There definitely was a learning curve. I lost more than half of my bees the first year. And then this past winter, I also lost some bees. But I'm getting the hang of it.... Just tiny things like feeding them or providing water during the hottest parts of the year can go a long way to making sure they survive," he says.

"Perseverance is the key word. You'll achieve anything you want to achieve, you just have to have some grit," he adds.

It's that grit and perseverance that served Toro in the Marines, and also helped him to push through the tough times in his business. They were qualities he says his father, who worked on the fields of Central California, instilled in him at a young age.

"When I was in high school, I picked tomatoes during the summer, fresh market tomatoes, so I could buy my school shoes. My dad thought it would be a good lesson to teach us the value of hard work," Toro says.

Now that he's back in agriculture as a business owner, helping to birth and grow those crops he used to pick, Toro is filled with big dreams.

"My dream is to get to close to a thousand hives at least. 1,000 would be the goal," he says.
"I also want to have some land in Oregon. That way, I can take my bees there in the summer."
Report a correction or typo
Related topics:
kfsnlocalish
TOP STORIES
Man stabbed to death by stepson, Tulare Co. deputies say
Motorcyclist killed in crash with van at McKinley and Temperance
Tulare COVID survivor gets married after months-long hospitalization
Can authorities prove if Brian Laundrie killed Gabby Petito?
Storm expected this weekend could trigger mudslides
Salami sticks linked to new salmonella outbreak
Students protest 'unlivable' conditions at Howard University
Show More
USC suspends fraternity after alleged drug-facilitated sexual assaults
Man shot in east central Fresno, police say
Fresno Co. health officials hoping vaccinations rise before holidays
Funding could be coming for widening project on Highway 41
Winco employee shot, critically injured after 2 rob Fresno store
More TOP STORIES News