Menendez brothers case back in spotlight thanks to TikTok teens: Reporter's notebook

Watch the full story on "20/20," streaming now on Hulu
ABCNews
By Erin Murtha 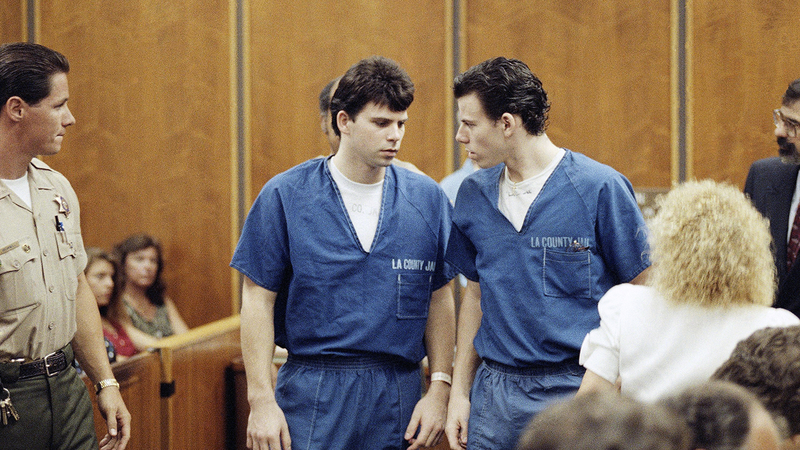 There are a few basic rules of working in news. First - tell the truth and tell it well. Second - always keep your eyes and ears peeled for new stories. Lastly, but certainly not least - keep a pulse on old stories for new developments. I think my team at ABC does a great job of all three - especially keeping up with the stories that we've taken pride in telling over the years.

That's why it was pretty surprising when an article called "The New Menendez Defenders" showed up in the New York Times in February.

There were no new developments in this case - not in years. But this news wasn't about the infamous Menendez brothers themselves, or their parents, or the trial that created a media frenzy decades ago. This story was about the army of internet defenders the convicted murderers had garnered on -- wait for it -- TikTok.

In order to understand where we've arrived now, you have to understand the basic facts of the Menendez Brothers' case. Lyle and Erik Menendez grew up in Southern California as sons of a wealthy couple, Kitty and Jose Menendez. In 1996, a jury found the brothers - who were in their early 20s - guilty of first-degree murder of their parents.

Both Erik and Lyle say they committed the murders after years of insufferable sexual abuse at the hands of their father. Meanwhile, many newspaper headlines at the time and documentary programs in the years following capitalized on the concept of greedy rich kids killing their parents for money.

The brothers have now served 31 years in prison, most of that time spent apart from each other - only being reunited recently at a prison in San Diego. They've exhausted most appeals processes and their prospects of a new trial have dwindled. For them, life inside prison walls hasn't changed all too much. But out in the real world, where social media sites like TikTok appear to have garnered the power to create actual change in the social justice system, a lot has changed.

The New York Times article detailed the mass following and attention the Menendez Brothers had gained on TikTok. As a millennial who only uses TikTok to watch videos of cute dogs and easy recipes, I was caught off guard. Why the Menendez Brothers? Why now? What is there even to post about?

I took to the primary source -- TikTok itself. I typed "Menendez Brothers" into the search bar, and my screen flooded with hundreds of videos. But the ones that I first saw didn't have anything to do with the Menendez Brothers' case at all. Instead, a young-looking girl was on my screen, fawning over images of the young, attractive brothers at their murder trial.

Sultry music played behind slowed-down footage as she joked about them being the "hottest criminals ever." Most of the videos I clicked on followed this theme, and I began to wonder if this whole "New Age Menendez Defender" movement was nothing more than teenage girls with an extreme attraction to bad boys. But then -- the TikTok algorithm kicked in.

As you interact with TikTok videos, the app will show you more videos related to that topic. Slowly but surely, the tone of the videos showing up completely changed. Sad music played behind clips of the brothers testifying about the abuse they claim to have endured; their faces contorted in anguish.

Captions begged viewers to listen to their "heart-wrenching testimony". Comment sections were flooded with outrage over their conviction and links to learn more information about the case. There were 173 million views on these videos. Right before my eyes, the army behind the Menendez Brothers grew stronger and louder with each passing second. But who were these people?

Frankly, they appear to overwhelmingly be kids. In researching this story, I reached out to dozens of TikTok users about the videos they were posting - and I could hardly find anyone over the age of eighteen. Could this be, in part, simply due to the audience that TikTok usually attracts? Of course, yes.

However, speaking to the teenagers I reached didn't feel like speaking to a teenager. They'd greet me with a bubbly introduction and tell me how old they were, before getting into an evidence-based narrative about why they believed the Menendez Brothers' sentencing was unjust. The demeanor these teenagers spoke with and the sheer amount of knowledge they had accumulated about a legally complex case was astounding.

Their youth only peeked through in their giddiness and excitement to help with my reporting. One TikTok user, eager to point me in the right direction, put me in a group chat with about ten other TikTok users who primarily used the social media site to create videos about the Menendez brothers or to connect with other supporters. I was soon flooded with messages from teens aged 13-19, complete with paragraphs-long sentiments about their beliefs. Most of it included complex legal jargon.

One of those very eloquent teenagers was an 18-year-old girl named Janne from Germany. She told me she first came across the case from a recommended video on YouTube that piqued her interest.

Janne discovered that the entire trial was available to watch online and spent a great deal of time watching testimonies and forming her opinions about the Menendez Brothers. Through her research, she says she has become an educated and passionate supporter of Erik and Lyle Menendez -- taking to TikTok to share her opinions.

Janne's TikTok account has garnered nearly 45,000 followers. Her most popular video, which has more than a million likes, shows the brothers testifying about sexual abuse while a sad song plays in the background. Janne does not credit the success of her account to advanced video editing skills or social media strategy - but rather to the sheer shocking and upsetting nature of Erik and Lyle's testimony.

"Watching someone describe these types of experiences is always very sad and very compelling," she told me.

That has been one of the most interesting parts about this reporting. None of these teenagers deny that this horrific crime of their parents being murdered happened or that it was Erik and Lyle who committed it. Rather - they take an empathetic approach supported guided by the benefits of hindsight.

As New York Times reporter Ezra Marcus told me -- these young adults weren't around to experience the sensationalism that takes place when a crime initially happened. They didn't live through the shock of the crime itself, or even the news reports in the days and weeks to follow. They're now looking at the murders through the lens of the values of 2021 -- especially with regard to the claims of sexual abuse.

All of the TikTokers I spoke with emphasized that they have grown up in an era where #MeToo reigns and where people can speak more openly about what were previously deemed to be uncomfortable issues.

These realities, combined with the abundant amount of available courtroom footage and unique style of TikTok have laid the groundwork for Gen Z TikTok users to generate an entirely new category of content.

Gone are the days where a news station was the only place to get information. Now, these TikTok users are thriving on the ability to tell a brand new story from a new perspective using old footage.

In a matter of months, the Menendez Brothers went from being an old tale of true crime to a viral social media sensation. Today's TikTok activists may be teenagers, but they believe they know what they're talking about...and a few million likes may prove it.
Report a correction or typo
Related topics:
murderabc newssocial mediau.s. & world
Copyright © 2021 ABC News Internet Ventures.
More Videos
From CNN Newsource affiliates
TOP STORIES