The decision was based on a review of studies that evaluated screening tests in adolescents and the benefits of early treatment.
ABCNews 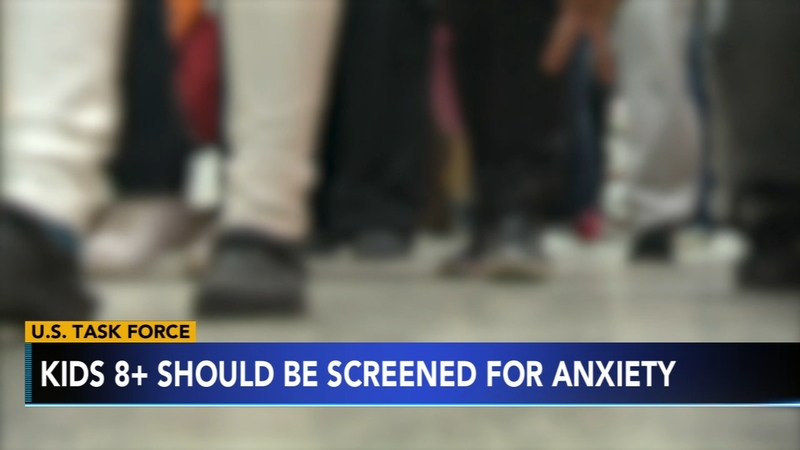 PHILADELPHIA -- Children as young as 8 years old should be screened for anxiety, the country's leading panel of experts on health prevention recommended Tuesday for the first time.

The new draft guidance comes amid rising rates of anxiety and depression among kids and teens in the U.S., particularly during the pandemic.

Written by the U.S. Preventive Services Task Force, the guidance suggests children and adolescents between ages 8 and 18 be screened for anxiety. It also doubles down on a prior recommendation to screen for major depressive disorder and suicide among children ages 12 to 18.

The USPSTF also said there are now high enough rates of anxiety and plenty of screening tools and treatments to recommend regular screening of anxiety among 12- to 18-year-olds.

Before COVID-19, the most recent comprehensive national survey found that 8% of children had a current anxiety disorder.

The burden of mental illness has only intensified during the pandemic.

Data from the Centers for Disease Control and Prevention released this month found 37% of youth have experienced poor mental health since March 2020.

This fall, a coalition of child health providers declared that the country was facing a "National Emergency in Child and Adolescent Mental Health."

The task force noted that untreated anxiety can be debilitating. In the short-term, it can cause physical symptoms, such as unremitting headaches or stomachaches.
Anxiety can also wreak havoc on daily life by leading kids to avoid school, interpersonal activities, or certain other situations.

In the longer term, those disruptions can lead to poor performance and developmental delays.

Additionally, anxiety can increase the risk of poor coping mechanisms such as substance use or development of other forms of mental illness commonly associated with anxiety such as panic attacks or depression.

"To address the critical need for supporting the mental health of children and adolescents in primary care, the Task Force looked at the evidence on screening for anxiety, depression, and suicide risk," task force member Dr. Martha Kubik said in a statement. "Fortunately, we found that screening older children for anxiety and depression is effective in identifying these conditions so children and teens can be connected to the support they need."

The agency noted that children with certain adverse childhood experiences, such as trauma, abuse, and inter-parental conflict may face particularly high risks, as well as children experiencing poverty, or those from communities of color who may be subject to "historic trauma, structural racism, and biopsychological vulnerability."

The task force did not offer recommendations on how frequently children should be screened but suggested it may be beneficial for some at-risk children to have repeated screenings over time.