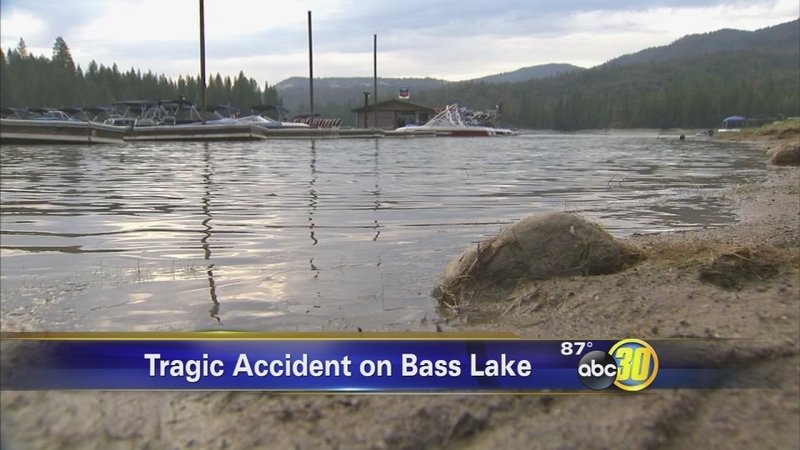 BASS LAKE, Calif. (KFSN) -- A boy,13, is dead and another teen is in critical condition after a boating accident in bass lake.

Investigators said a family was inner tubing a quarter mile away from Miller's Landing when two teens fell into the water and were struck by a jet ski.

Witness photos show the tense moments as first responders raced to save a teen's life. Madera County Sheriff's deputies said a boy, 13, and his relative, 16, had fallen off an inter-tube when they were struck by a man driving a jet ski.

A witness gave me photos of the aftermath. Sadly the 13 y/o boy who died was pronounced dead at the dock. @ABC30 pic.twitter.com/eBuKme0QzP

"We were lucky to have doctor and a paramedic in the boat right next to them so they were able to jump in and help. and they did everything in their power," said Michelle Miller. She owns Miller's Landing. She said there hasn't been a fatal boating accident in more than ten years.

"We do everything in our power to keep it safe for everyone but unfortunately once in a while something like this happens and there's just no words for the mom that lost her boy," said Miller. She said the teen's family and the jet-ski driver didn't know each other. The driver hasn't been identified and investigators said he wasn't under the influence of alcohol or drugs. Miller rented the man a jet ski from her dock earlier Saturday morning.

"Of course people think that in their heart of hearts that they're experts. I do believe that was the case in this situation. when you let go of the gas it doesn't stop," said Miller.

The 13-year-old was pronounced dead at the dock and his 16-year-old relative was life-flighted to CRMC with a head injury.

This is 13 y/o David Flores. He died when hit by a jet ski after falling off an inner tube at Bass Lake. pic.twitter.com/Hsn42DDVXQ

This is 16 y/o Julissa Valenzuela. She is in critical cond. and in a coma. She was hit by a jet ski at Bass Lake Sat. pic.twitter.com/EszIZiOpC1

"The water level is the lowest it's been in a very long time so a lot less water space for people to be tend to be more crowded," said Lieutenant Bill Ward of the Madera Co. Sheriff's Office.

At this point investigators are calling this an accident. Whether the driver was negligent is still under investigation.

If you would like to help, there have been two accounts set up:
Hospital Funds for Julissa and Funeral Funds for David

Owner from Miller's Landing at Bass Lake says vessels involved in crash were rented from their dock. @ABC30 pic.twitter.com/p7PnOdsYVm