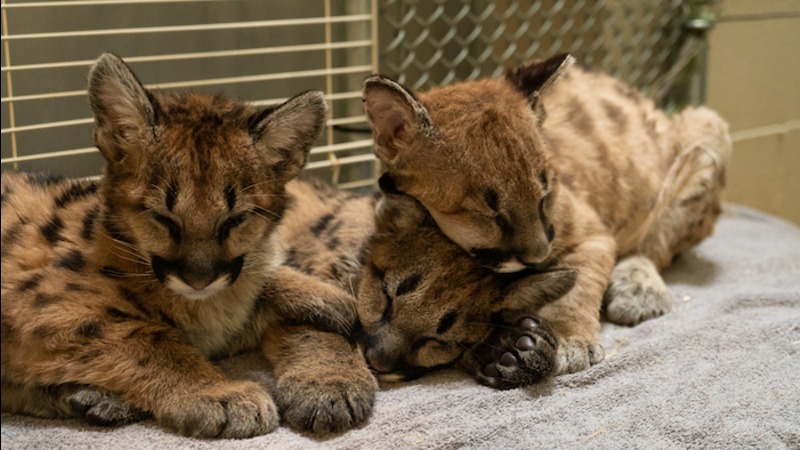 REDDING, Calif. -- After their rescue from the Zogg Fire, these three mountain lion cubs took time to recover at a veterinary hospital. Now, they have been adopted, and will soon settle into their long-term home at Columbus
Zoo and Aquarium.

"Named 'Captain Cal' by the Cal Fire firefighters who found him limping down a burned-out road in Redding on September 30, 2020, the severely burned orphaned mountain lion cub is now fully recovered, 47 days after he was first rushed to Oakland Zoo's veterinary hospital by the California Department of Fish & Wildlife (CDFW)," according to a press release from the Oakland Zoo.

Big news: Captain Cal and his adopted sisters have found a home! All three rescued mountain lion cubs will be moving together to the @ColumbusZoo in Ohio! (1/3)https://t.co/ZiCEC37u5n pic.twitter.com/PaZ0aS9add

Captain Cal is not related to the two female cubs, though in their time together at the hospital, they have bonded.

They will be on a flight to Indianapolis, Indiana with members of Oakland Zoo's team to ensure their safety, and a smooth transition. From there they will be driven to the Columbus Zoo.

Rescued from the devastating #Zogg fires and August, these 3 cubs captured our hearts as we nursed them back to health here at our veterinary hospital. We are so sad to say goodbye to these adorable kittens but so happy they have a forever home to go to — as a family.

After the cubs are medically cleared following a quarantine period, the zoologists hope to introduce them to their older female mountain lion, Jessie.

"At almost 17 years old, Jessie has surpassed the median life expectancy of 16 years for mountain lions in human care at facilities accredited by the Association of Zoos and Aquariums (AZA). While she is now nearly blind, she is still in good health overall. The Columbus Zoo's Animal Care team notes that she has a sweet disposition toward other mountain lions-she was very close to her brother, Billy, with whom she was rescued as part of a wildlife confiscation in 2004. Billy passed away in early 2020, and the team hopes to provide Jessie with the opportunity to form a bond with the cubs in the future," according to the press release.

How it started: How it's going: pic.twitter.com/CadvBoTnS4

The three of them were rescued by firefighters. Captain Cal, unlike the other two, suffered from burns in his close call with the flames at only a few weeks old.

"In their native range, mountain lion cubs stay with their mothers until they are around two years of age in order to learn the skills to survive on their own. Because these cubs were orphaned at such a young age, they would be unable to learn how to survive in the wild," according to the press release.
Report a correction or typo
Related topics:
pets & animalsoaklandzoozoo adventureswildfirecalifornia department of fish and wildlifemountain lion sightingcalifornia wildfiresoakland zooanimals in perilanimal rescuewild animalsanimalanimal newsanimal hospital
Copyright © 2022 KGO-TV. All Rights Reserved.
ANIMAL NEWS
Video: Dolphin stampede spotted off coast of Ventura
Alpacas escape enclosure, go on adventure through Ca. neighborhood
VIDEO: Sea lion gets help after somehow making its way onto freeway
World's oldest living aquarium fish, named Methuselah, lives in CA
TOP STORIES
Shooting at Tulare Co. gas station was a shootout between rival gangs
Man accused of killing 75-year-old father near Porterville
10 injured in PA bridge collapse; human chain formed to help
Fresno man sues, blames recalled vehicle for severe injuries
How many times can I reuse my N95 mask?
Fire damages Fresno County home
Fresno City Council agrees to purchase 2 more motels to house homeless
Show More
38-year-old man arrested after standoff with Fresno police
Reparations are for descendants of Black slaves: California official
Police searching for man who tried to rob Merced Walgreens, Chevron
Kings River snowpack above average for end of January
12-year-old boy hit by car in southeast Fresno, police say
More TOP STORIES News