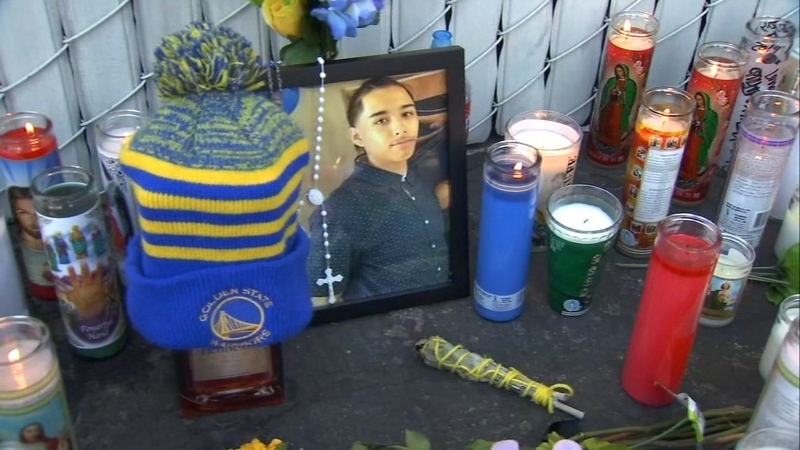 FRESNO, Calif. (KFSN) -- The man who witnessed his friend get stabbed to death outside a mini-mart last year describes the scuffle that led to a 20-year-old getting killed over a bottle of alcohol.

The homicide happened in front of the Fastrip mini-mart at Chestnut and Clinton last August.

According to witnesses, the victim asked Gabriel Vela to buy him a bottle of Hennessy since he was underage.

But when Vela wasn't able to deliver on it, a fistfight began.

Vela took off his mask Wednesday, long enough for the witness, Elian Arteaga, to identify him as the suspect who he says stabbed his friend to death.

"I honestly can't remember what he was wearing but I kinda remember the tattoo that he had," said Arteaga.

The prosecutor asked, "Can you describe that?"

"He had a C over his eye," replied Arteaga.

The judge ordered we not show the faces of civilian witnesses in court.

Arteaga recalled drinking with his friend, 20-year-old Isaiah Casillas, last summer; they were celebrating a birthday and ran out of alcohol so they decided to go get more. But neither of them were of legal drinking age.

"We were just planning to ask somebody out there to try to get it for us," said Arteaga.

Deputy District Attorney Amy Freeman asked, "Have you ever done that before?"

The witness said his friend asked Vela, who agreed. They did not know him prior to the night Casillas died. So he gave him money and watched as he walked inside the Fastrip mini mart.

But when Vela got to the cash register, the clerk refused to sell him the Hennessy since he didn't believe it wasn't for him. He said the defendant was a daily customer who regularly bought less expensive single bottles of King Cobra.

Freeman asked, "Did you refuse to sell him Hennessy just because that wasn't something that he normally bought?"

When Vela came back out with only King Cobra and no Hennessy, the witness said Casillas demanded his money back. But only a portion was returned. So a fight broke out.

"I grabbed him and I put him like this. My hand was kind of on his chest and I was like, 'He got a knife, watch out. And then my hand was wet and I noticed it was blood, like his body started getting heavy," Arteaga testified.

Casillas later died after being stabbed in the chest.

Vela has a prior criminal history that includes a strike. If he's found guilty, he could spend 51 years to life in prison.
Report a correction or typo
Related topics:
fresnohomicide investigationstabbing
Copyright © 2021 KFSN-TV. All Rights Reserved.
More Videos
From CNN Newsource affiliates
TOP STORIES