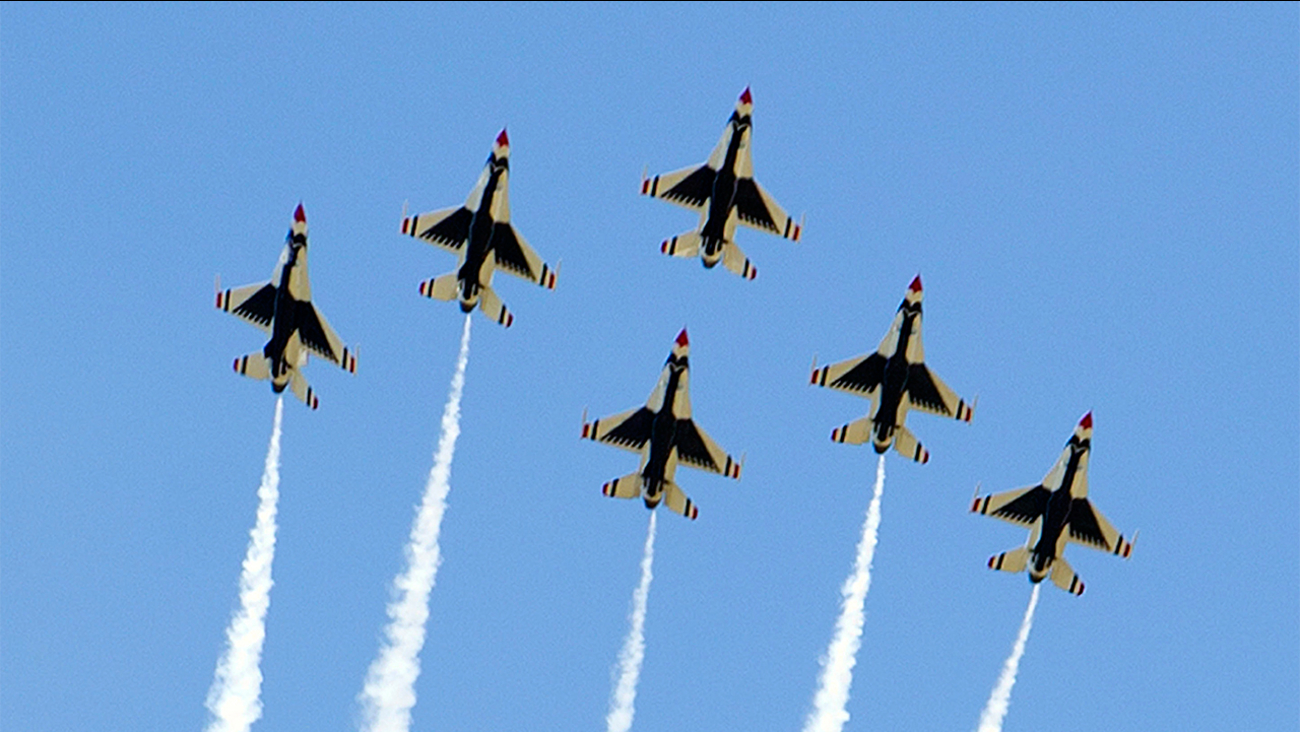 A short helicopter ride later, the pilot found himself shaking hands with the president on the tarmac at a nearby air base.

"The president thanked the pilot for his service to the country and expressed his relief that the pilot was not seriously injured," said White House spokesman Josh Earnest.

The Air Force identified the pilot as Maj. Alex Turner, of Chelmsford, Massachusetts. He has more than 270 combat hours over Libya and Iraq.

News of the crash broke while Obama's motorcade was returning to Peterson Air Force Base for his flight back to Washington. Turner ejected about 15 miles south of the Air Force Academy near Peterson, where Air Force One was waiting to take off.

Emergency responders who picked up Turner in the rescue helicopter brought him to a spot that happened to be on the president's motorcade route back to Air Force One.

Turner parachuted down about a half-mile from his plane and was standing and chatting with bystanders when firefighters from the nearby town of Security arrived, said Pete Smith, a member of the Security Fire Department.

"He seemed pretty calm," Smith said. "I would have been a little more upset than he was."

The pilot was in good condition, but he will undergo medical screenings, according to the Thunderbirds team.

The Air Force said the Thunderbirds will cancel upcoming shows while the crash is investigated, but officials did not say how long the team will be grounded.

The crash was one of two Thursday for the military's elite fighter jet performance teams. An official in Tennessee said a pilot was killed when his Blue Angels fighter jet crashed, but no civilians were hurt on the ground. The Navy's Blue Angels team was near Nashville practicing for a scheduled performance this weekend.

In Colorado, the Thunderbirds had just finished their traditional performance at the commencement, screaming overhead as the graduating officers tossed their white hats skyward.

The jets then did multiple fly-bys over the academy's football stadium, where the graduation took place, blasting by in tight formations or looping high overhead.

There was no obvious sign of trouble with any of the jets during the performance.

Peterson base spokesman Jeff Bohn said it was unclear whether the plane developed problems while on its final approach path over empty fields. It also was unclear whether Turner maneuvered the jet into a position to crash without harming anyone on the ground.

Turner had to make multiple decisions in a moment.

Justin Payne was working on wallpaper inside his house when the plane struck the ground.

"What I heard was a big boom," Payne said. "I ran outside. Three or four degrees to the left and that jet would have hit our house."

Payne said the fuselage slid about 2,000 feet before coming to rest. He said it appeared the nose was ripped from the rest of the F-16.

Authorities quickly cordoned off the area, and a hazardous materials crew was suiting up to inspect the site, said Payne, who added he was ordered to stay inside his house.

A smudgy, gray skid mark extended a few hundred yards from where the plane came to rest on its belly in the tall grass. About four hours after the crash, an Army Black Hawk helicopter circled low over the downed jet and made several passes along what appeared to be the plane's path before it crashed.

Air Force Staff Sgt. Alexander Rodriguez, a U.S. Air Force firefighter stationed in San Angelo, Texas, who was visiting with his family, said he raced from his brother's house after hearing "a few loud bangs" and saw the plane gliding close to the ground before impact.

"I started booking straight for the aircraft," Rodriguez said. "I saw the cockpit was empty and checked for any fuel hazard - there was a single fuel leak on the right side. I heard a ticking noise that indicated something was still running and I backed off."

By then, first responders from Petersen and Colorado Springs were arriving on the scene, he said.

The Thunderbirds are the Air Force's precision flying team, known for their red, white and blue painted F-16 fighter jets. The unit, based out of Nevada's Nellis Air Force Base, will perform more than 40 shows in 2016, according to its website. The vaunted aerial demonstration team has been performing air demonstrations since 1947.

During a performance at the Chicago Air and Water Show in 2005, two of the jets made contact while they were flying in formation, and a missile rail was dislodged. No one was injured in that accident.

The group was in a diamond formation when a 4-foot-long missile rail came loose from the wing of one of their jets. The carbon fiber object fell into Lake Michigan, roughly 2,500 feet from where spectators had gathered to watch the show. No one was hurt.

Two years earlier, a Thunderbird jet crashed at an air show at Mountain Home Air Force Base in Idaho as about 85,000 spectators looked on. The pilot safely ejected with only minor injuries.