Fire breaks out at Merced apartment complex, 1 dead, many displaced 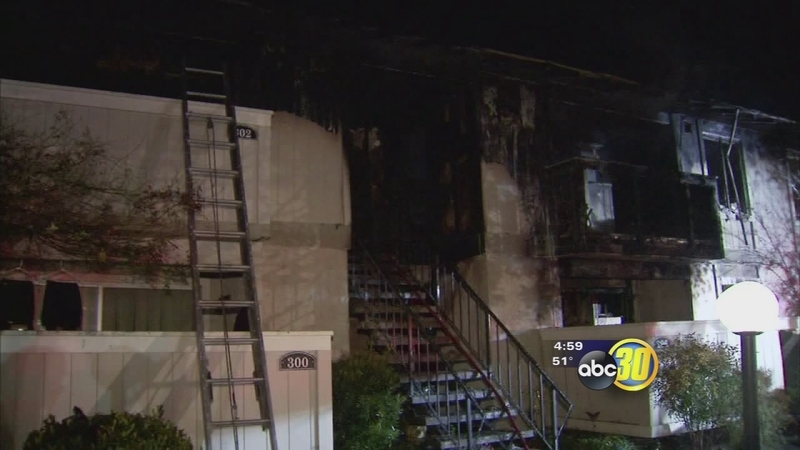 Fire breaks out at Merced apartment complex, 1 dead, many displaced

MERCED, Calif. (KFSN) -- A young man pulled his neighbor away from a burning apartment complex in Merced. Despite his best efforts, the victim did not survive and investigators are still working to figure out how the fire started.

Action News spoke with several residents who are heartbroken over the death of their neighbor. Many are also worried about finding new homes now that three units are destroyed and five others are damaged.

Smoke and flames poured out of an apartment complex on Brookdale Drive early Wednesday morning, sending neighbors scrambling for safety. "I had my girlfriend, told her go outside, take the dog, go outside, leave everything else, couldn't see anything. Everything was just smokey and black," said Ferdinand Celestino, fire victim.

Celestrino said the blaze destroyed his home. But as it was burning, he also spotted his neighbor, James, sitting on the stairs with a shocked look on his face. "Decided to go to him take his arm, throw him around my shoulder, carry him, drag him, try to get him to safety."

First responders arrived a short time later and tried to revive the man, but he died at the hospital. Neighbors placed flowers on his car and described him as a friendly man, possibly in his 60's, who was well known and liked. "Very giving, very friendly, always spoke to you, never had anything bad to say about anyone. He was a doll. It's an awful thing, it's just awful," said Michelle Soria, fire victim.

Firefighters said another woman was injured after jumping from a second story unit, but other tenants helped break her fall and lift her over the fence. "I think they did a very heroic act, and they were there definitely, probably saved her from greater injury," said Battalion Chief Cory Haas, Merced City Fire.

Neighbors are also coming together to help at least 15 people who are now displaced. "Christmas time, and to have this kind of news and deal with these issues-- there are people who lost everything, and whatever we can do, because this is my home, whatever I can do for my neighbors-- I'm going to help out any way I can," explained Qutresa Hogges, neighbor.

Neighbors said the man who died had some health issues, but it's not clear yet if those played a role in his death.