Firefighters: Suspect in shooting of police officers in Fremont has died 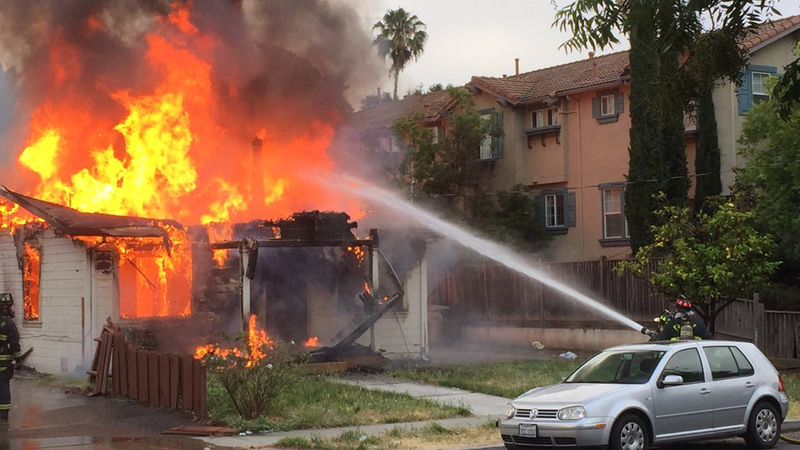 FREMONT, Calif. -- Firefighters have confirmed the suspect in shooting of two police officers in Fremont has died after a tense all night standoff that resulted in a house being heavily damaged by fire.

The Oakland police SWAT team is took over for the Alameda County sheriff's office. Tear gas was fired into the home around 2:15 a.m.

The suspect's parents were at the scene. The sheriff's department says they tried to help with negotiations but the suspect was still not willing to come out.

The sheriff's spokesman says the suspect is a Bay Area resident and law enforcement is familiar with him. Authorities say this is not the suspect's home. Police say the suspect may have shot off a lock to gain entry.

The incident began yesterday afternoon when a Fremont police officer tried making a traffic stop on this white truck behind an AutoZone store. But the suspect backed into the officers vehicle and shot the officer.

The suspect, wearing an orange Giants jersey took off running into a Safeway store. Then he went over a fence and onto Roberts Avene where shots were fired again and a second officer was wounded.

More than 100 officers from throughout the Bay Area came to aid in the suspect search.

#Breaking- Suspect in Fremont officer shootings is confirmed dead in house according to Fremont Fire. pic.twitter.com/0R6gixZ6e2

Huge fire at house where shooting suspect is barricaded in Fremont after tear gas was fired several times. pic.twitter.com/3vjCSUNf9M

All Fremont schools will be open. Standoff w/ officer shooting suspect confined to area near Roberts and Washington. pic.twitter.com/22E86q82pb

Series of explosions at Fremont house where shooting suspect is barricaded.
House has been on fire for ~3 hours. pic.twitter.com/jrCFFFQiLw

Fire at #Fremont home where suspect is barricaded. Police say he was alive/talking when phone died about 1/2 hr ago. pic.twitter.com/73fAFeSFQe