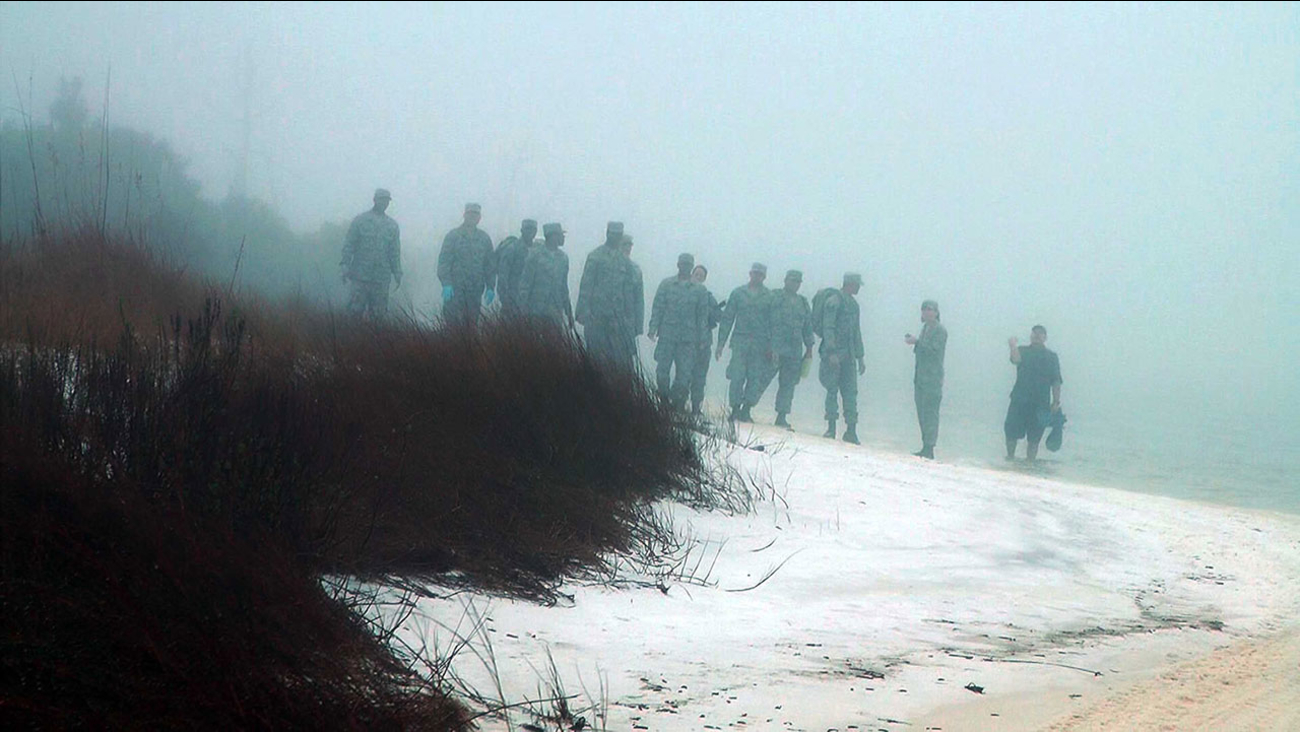 Military personnel wade in the water and search on the beach under heavy fog at Eglin Air Force Base, Fla., Wednesday, March 11, 2015 (Melissa Nelson-Gabriel)

All 11 service members were presumed dead after the the Army National Guard's UH-60 Black Hawk helicopter went down offshore, a Pentagon official said.

Kim Urr, 62, who works at the nearby Navarre Beach campground, said she heard a strange sound, followed by two explosions around 8:30 p.m. Tuesday.

"It sounded like something metal either being hit or falling over, that's what it sounded like. And there were two booms afterward, similar to what you hear with ordnance booms, but more muffled," Urr said.

President Barack Obama spoke with the military leaders involved and expressed his condolences to the families before saying he's confident of a detailed and thorough investigation, said his spokesman, Josh Earnest.

"Our thoughts and prayers are with them and their families as the search and rescue continues," Defense Secretary Ash Carter said on Capitol Hill.

The Black Hawk crashed as Marines and National Guardsmen practiced "insertion and extraction missions," using small boats and helicopters to get troops into and out of a target site, said Capt. Barry Morris, spokesman for the Marine Corps Special Operations Command at Camp Lejeune.

Fog had reduced visibility to less than two miles at the time, according to the National Weather Service. Another helicopter participating in the training returned undamaged, authorities said.

Despite the human remains washing ashore, the military still called it a rescue mission Wednesday, said Sara Vidoni, a spokeswoman for Eglin Air Force Base, outside Pensacola.

The fog remained so heavy Wednesday that search boats just offshore could be heard but not seen, blasting horns as their crews peered into the choppy water. It finally began to lift in the afternoon, enabling a helicopter to slowly survey the water.

About a dozen airmen wearing fatigues walked shoulder-to-shoulder down the beach, scanning the sand, while civilian rescue crews and searchers with dogs joined the effort.

The Coast Guard said debris was first spotted about 1:30 a.m. Wednesday, and that the search area expanded to a 17-mile stretch of the narrow sound separating Santa Rosa Island from the Florida Panhandle mainland.

The Marines were part of a special operations group based in Camp Lejeune. The National Guard soldiers were from a unit based in Hammond, Louisiana. They had arrived Sunday for a week of training.

None were immediately identified, so that families could be told first.

The helicopter that crashed had joined the training from an airport in nearby Destin. The site includes 20 miles of pristine beachfront under military control since before World War II - an ideal place for special operations units from across the military to practice, test range manager Glenn Barndollar told The AP last year.