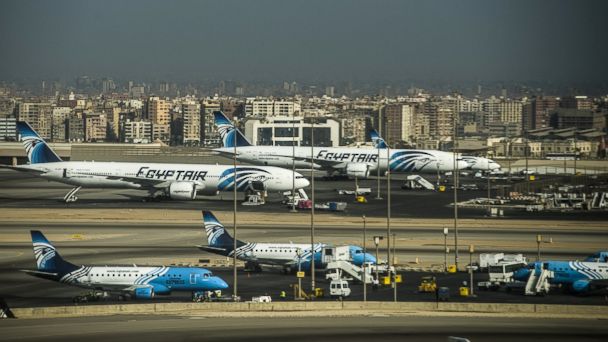 Mystery surrounds the final moments of the missing EgyptAir flight, which disappeared en route to Cairo from Paris.

Egyptian officials have suggested that the incident was more likely caused by terrorism than a technical problem.

"I don't want to go to assumptions like others, but if you analyze the situation properly, the possibility ... of having a terror attack is higher than having a technical" failure, the Egyptian aviation minister told reporters today.

Flight MS804 went missing about 174 miles off the Egyptian coast, shortly after entering Egyptian airspace, the airline said overnight. An official from EgyptAir released a statement this afternoon saying that the country's Ministry of Civil Aviation had received official word that a floating object found in the waters of the Mediterranean Sea near the island of Karpathos most likely belonged to wreckage of the missing plane.

But this statement was later disputed, with EgyptAir Vice President Ahmed Adel saying on CNN that no wreckage was found.

French President Franois Hollande, speaking at the Elysee Palace in Paris, told a news conference earlier today that authorities there fear that the flight, with 66 people aboard, had crashed but it was too soon to speculate on the cause.

"When we have the truth, we need to draw all the conclusions," Hollande said. "At this stage, we must give priority to solidarity with the families" of the victims.

According to the airline, 56 passengers, three EgyptAir security personnel and seven crew members were aboard the aircraft, an Airbus A320 manufactured in 2003.

The flight's passengers included two infants and one older child, the airline said.

Grieving relatives of those on board gathered at the Cairo International Airport in Egypt this morning, awaiting word on their missing loved ones.

The plane left Paris Charles de Gaulle Airport at 11:09 p.m. local time and lost contact with the radar tracking system over the Mediterranean Sea at 2:45 a.m. at 37,000 feet, after entering Egyptian airspace, the airline said. The flight was expected to arrive at 3:15 a.m. (France and Egypt are in the same time zone.)

Officials at the Greek Ministry of Defense told ABC News that the EgyptAir pilot made a 90-degree turn to the left and then a 360-degree maneuver as the plane plunged about 20,000 feet just before officials lost contact.

About four hours after news of the missing plane was reported, EgyptAir tweeted that military search and rescue received a distress call from the airplane's emergency equipment.

Airbus confirmed the loss of its plane in a statement early this morning and said the aircraft had accumulated about 48,000 flight hours.

Egyptian armed forces rescue teams have been deployed, the airline said, and Greece has joined the effort as well.

A spokesman for the Hellenic National Defense General Staff told ABC News that rescue teams are battling strong waves and wind in their efforts.

The U.S. Embassy in Cairo tweeted, "We are tracking reports of missing #EgyptAir flight #MS804, and our thoughts are with the relatives of passengers at this time."

U.S. Secretary of State John Kerry expressed his condolences to the victims of the tragedy while addressing a meeting of NATO foreign ministers this morning.

This is a developing story. Please check back in for updates.