US launches military strike on Syrian air base 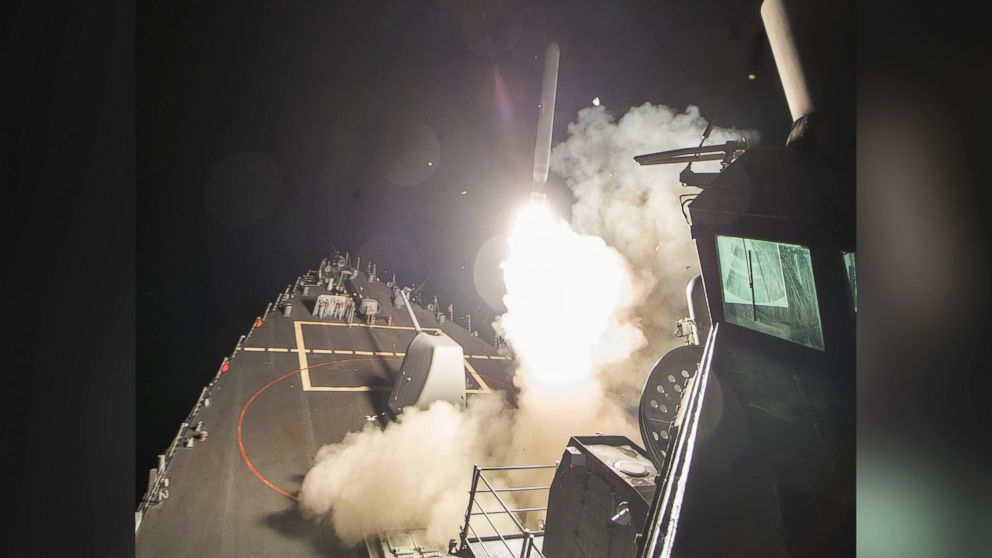 Responding to a Syrian chemical weapons attack on Tuesday that left scores dead, the United States initiated a military strike Thursday on an airbase in Syria, multiple U.S. officials have confirmed, launching 59 missiles at an air base in the country.

The Pentagon said that the airstrike, which targeted Shayrat Air Base in Homs Province -- where the chemical attack was initiated earlier in the week -- struck multiple targets with tomahawk missiles launched between 8:40 and 8:50 p.m. Eastern Standard Time, from destroyers USS Porter and USS Ross in the Mediterranean Sea.

President Donald Trump said the strike was in the "vital national security interest" of the U.S.

In a statement to Syrian state TV, the Syrian army said the attack had left six people dead and several injured, in addition to "big material losses."

On Tuesday, a chemical weapon attack on a Syrian town killed at least 86 civilians. Blame for the assault has landed on Syrian President Bashar al-Assad despite the Syrian government's condemnation of the attack and insistence that rebels fighting in the country's civil war were at fault. The Turkish Health Ministry later determined that Sarin was used in the attack, based upon autopsies of some of the victims.

A U.S. official said that radar spotted a Syrian military fixed-wing aircraft dropping chemical weapons bombs earlier in the week and that airstrike appeared to intentionally seek out an underground hospital operated by a rebel group.

"There can be no dispute that Syria used banned chemical weapons, violated its obligations under the chemical weapons convention and ignored the urging of the U.N. security council," Trump said Thursday night. "Years of previous attempts at changing Assad's behavior have all failed and failed very dramatically."

After the airstrike, a Pentagon spokesman reported that missiles were directed at "aircraft, hardened aircraft shelters, petroleum and logistical storage, ammunition supply bunkers, air defense systems, and radars." A U.S. official said that Russia, which has personnel stationed at the base, was notified of the airstrikes in advance. The Pentagon noted that "extraordinary measures" were taken to prevent Russian casualties.

In response to the attack, Kremlin spokesman Dmitry Peskov said that Russian President Vladimir Putin regarded the strike "as aggression against a sovereign nation" that was carried out "in violation of international law, and also under an invented pretext."

From his Mar-a-Lago estate in Florida where he is meeting with Chinese President Xi Jinping, Trump called on allies to join the U.S. in ending the violence in Syria.

"Tonight, I call on all civilized nations to join us in seeking to end the slaughter and bloodshed in Syria and also to end terrorism of all kinds and all types," said Trump.

Earlier in the week, with video of victims being hosed down with water as they writhed in pain made its way across the world, President Trump denounced the act in strong terms while also placing some of the culpability on his predecessor Barack Obama.

"These heinous actions by the Bashar al-Assad regime are a consequence of the past administration's weakness and irresolution," Trump said in a statement Tuesday. "President Obama said in 2012 that he would establish a "red line" against the use of chemical weapons and then did nothing."

On Wednesday, the National Security Council met to discuss the situation in Syria, but Trump had not yet made a decision about military action, according to a U.S. official who added that he would be presented with "an entire range" of options.

Speaking with reporters on Air Force One Thursday en route to Florida, Trump addressed the situation in response to questions of whether Assad should remain in power.

"I think what happened in Syria is a disgrace to humanity," said Trump. "He's there and I guess he's running things, so something should happen."

In Florida, awaiting the president's arrival, Secretary of State Rex Tillerson said that the country is "considering an appropriate response for [the] chemical weapons attack," and cast doubt on Assad's position as the country's leader moving forward.

"Assad's role in the future is uncertain clearly and with the acts that he has taken, it would seem that there would be no role for him to govern the Syrian people," said Tillerson. The comments were a reversal from remarks Tillerson gave in Turkey last week when he said the U.S. would not insist upon Assad's removal.

"The longer-term status of President Assad will be decided by the Syrian people," said Tillerson. Sen. Marco Rubio, R-Fla. said after the chemical attack that he believed the expression of Tillerson's stance could have been read by Assad "that it is no longer a priority of the United States to have you removed from power," and granted the Syrian leader "an incentive to act with impunity."

The Syrian civil war started in 2011 as pro-democracy protests swept the country in the wake of the region's Arab Spring. An attempted crackdown on protesters fueled groups fighting back against the government and demonstrations turned violent. Eventually, a group of rebels -- including Syrian military defectors -- organized to fight the Assad regime.

The Syrian government is in control of a significant portion of the country, but the situation has become increasingly complicated with the emergence of ISIS as the terrorist group moves into the country. The U.S. and a global coalition against ISIS have previously launched strikes targeted against the group and Al-Qaeda.

In March, 400 Marines and Army Rangers were sent to Syria to provide support to U.S.-backed rebels fighting ISIS in the country. That group brought the total number of American forces in Syria to 900, according to U.S. officials.