VIDEO: Unarmed man on ground with hands in air before police shoot him 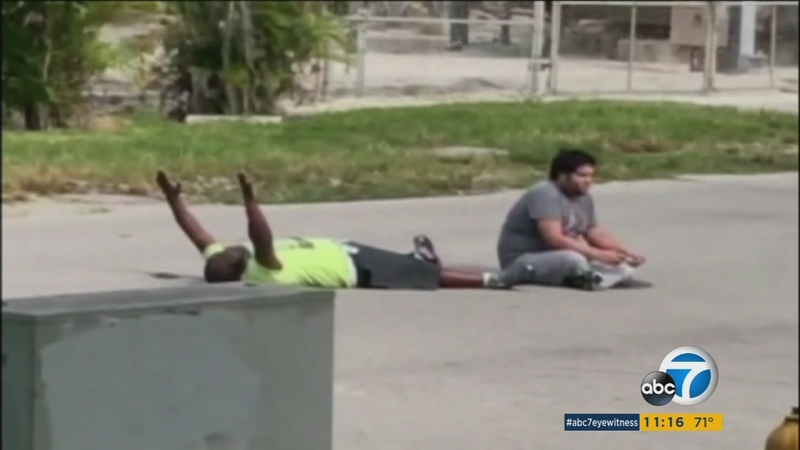 VIDEO: Unarmed man on ground with hands in air before police shoot

NORTH MIAMI, Fla. -- A behavioral therapist was shot by police in North Miami, Florida, while attempting to help a suicidal man with autism. Video from the scene showed the therapist, later identified as 47-year-old Charles Kinsey, had laid on his back and put his hands in the air while communicating with officers.

Kinsey said while his hands were up, an officer shot him.

There doesn't appear to be video of the actual shooting, but Kinsey said he still had his hands in the air when he was shot.

North Miami police said they responded to NE 14 Avenue and NE 127 Street on Monday after they received a call about an armed man threatening suicide.

Kinsey said the man was one of his patients at an assisted-living facility, according to ABC affiliate WPLG-TV in Miami.

In video of the incident, Kinsey, while on his back with his hands in the air, can be heard shouting to police, "All he has is a toy truck, a toy truck. I am a behavior therapist at a group home."

Kinsey was also heard attempting to calm down the man with autism.

"Rinaldo, please be still. Rinaldo, sit down. Rinaldo, lay on your stomach," he said.

While Kinsey was trying to help his patient, an officer fired at him three times, according to police.

Kinsey was struck in the leg and was taken to the hospital. He was listed in good condition.

The officer who shot Kinsey was placed on administrative leave, per department policy.