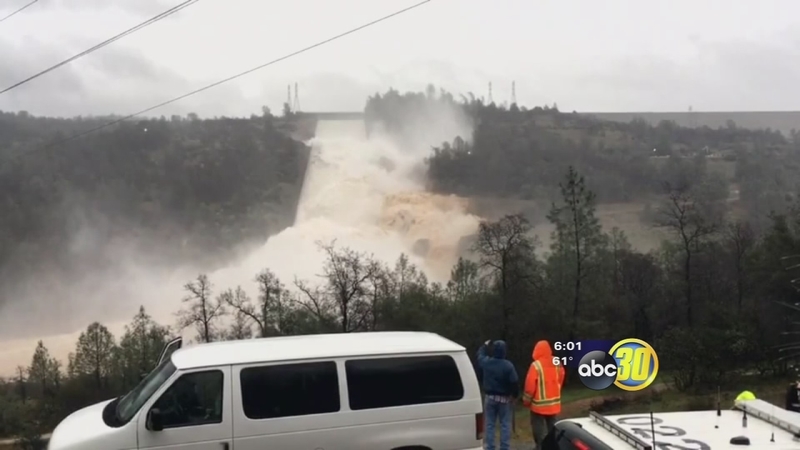 BUTTE COUNTY (KFSN) -- The Oroville Dam, the nation's tallest and just north of Sacramento, is now at record levels.

Its emergency spillway is in danger of failing and unleashing uncontrolled flood waters on towns below.

"This is still a dynamic situation," Butte County Sheriff Kory Honea said. "And it's still a situation where we're trying to assess the damage."

"We already ran out of a gas. All we have is diesel left," a gas station employee near the dam said. "The truck was supposed to come but never did."
EMBED More News Videos

Residents were stuck in bumper to bumper traffic as they tried to flee.

"We're trying not to go near the flooding area so we can go home, but we're probably going to be stuck down there" evacuee Frank Mastrangelo said.

"And I'm scared because I've never been in anything like this before," his wife Kitty added.

Last week, a nearly 200-foot long, 30-foot deep hole was created after chunks of concrete came off the main spillway.

"There is a plan currently in place which would hopefully plug that hole. That would include using helicopters to drop backs of rock into the crevice to prevent erosion," an official said.

A day after damage at the Oroville Dam forced thousands to flee, scenes of gridlock are now replaced by eerie silence.

Restaurants are closed, roads are blocked and Geltz is finding gas stations are bone dry.

"All these anxieties and fears, I've never felt that," she said. "I've never had this kind of a fear and panic all at one time."

Geltz lives below Oroville Dam, where bad news came in threes. First, the dam was about to overflow. Then, pieces of concrete started falling off the main spillway. Finally, on Sunday, the emergency spillway also started cracking.
EMBED More News Videos

Restaurants are closed, roads are blocked and many evacuees found gas stations to be bone dry.

"Our phones went, 'Wah,' and it said severe imminent threat and get out of town," evacuee Tomi Cogan said. "Oroville, Palermo, and all the way down to Yuba City."

Over 180,000 people were ordered to evacuate in fear the spillway would collapse, unleashing torrents of water. In a frenzy, Tomi Cogan forgot to grab her son's medication and now can't get back in.

Even though water levels have receded 24 hours later, evacuations remain in place and Geltz said they should.

"When I'm watching that river rise, and when they issued that warning, it was time," Geltz said.

For the first time, officials were forced to use the emergency spillway and then found a second hole that caused the evacuations. Officials are now saying the water levels are dropping but the threat is still there.