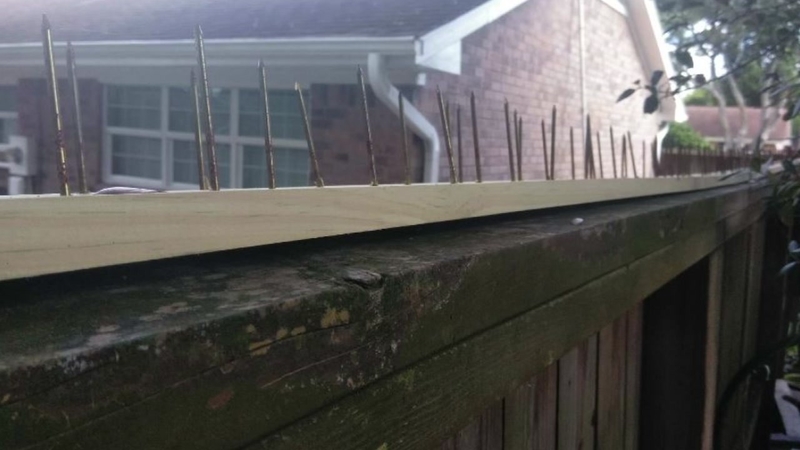 LEAGUE CITY, Texas -- A League City dog owner is furious after nails appeared on his fence, objects placed by the man who owns the home next door.

"We picked Sky because of her temperament," Gauntt said.

What he didn't realize was how fitting Sky's name was. The dog likes to climb.

Recently, his neighbor captured Sky balancing along the fence. "I was shocked when I saw the initial picture," Gauntt said.

The actions didn't just shock his neighbors, it terrified them. The tenants contacted landlord Percy Smith.

"The dog climbed the fence while you're working in the backyard with the dog sitting six foot six above your head," Smith said. "It's a pretty threatening position to be at."

To stop it, Smith placed wood along the fence, with hundreds of nails poking through. He did so because his tenants have dogs, and a baby on the way.

"You can't shoot the dog, you can't injure him, so you find a way to block him without injuring him and that's what this was," Smith said.

It took a week before Gauntt noticed the nails.

"God forbid she jumped up there and got her paw stuck, and my children come home and find their dog stuck on the fence, impaled," Gauntt said.

League City code enforcement investigated. The city said the nails must be removed because it breaks an ordinance.

If it happens again, the landlord can be cited.

"I do not know what the resolution is," Smith said. "I could build a new fence and put it higher. That could be one option."

The dog owner believes he's found one that doesn't involve the fence. He's placed barriers against trees, measures he believes will stop Sky from climbing, and live a long life with her new family.

The landlord suggested using barbed wire as an option. But that would break the city ordinance as well.

It states fences can't contain broken glass, barbed wire, spikes or nails designed to inflict pain to a person or animal. If those items are used, homeowners face a $500 fine.