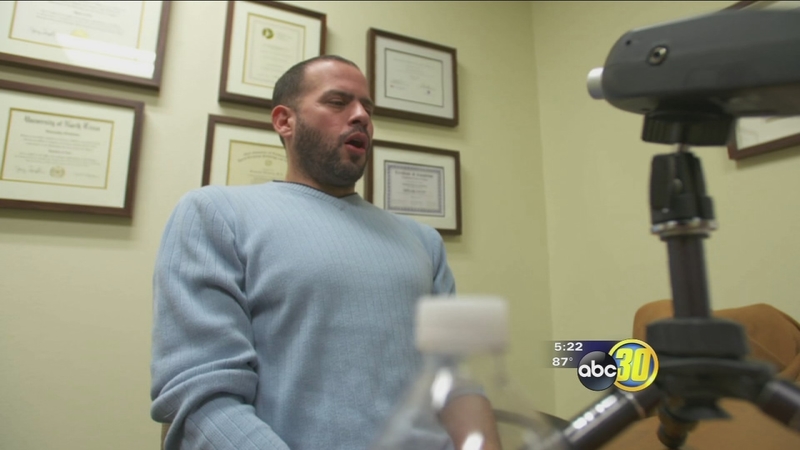 RICHARDSON, Texas. (KFSN) -- As many as one million Americans live with Parkinson's disease, but with no cure, living with it can be helped by re-learning some simple things, like speaking up.

As a marine, 37-year-old Jason Arwine trained to fight a variety of enemies ... but Parkinson's disease wasn't one of them.

The biological sneak attack first left a tremor in his hand, a slight limp ... and then his voice got quiet.

"And I kind of say, I lost part of me. Being in the military I'm used to yelling and having people hear me," Arwine told Ivanhoe.

Jason found his voice ... and an ally ... in the Parkinson voice project. Since Parkinson's patients lose the ability to speak and to swallow, the projects two-part therapy includes pumping up patients' voices to reach between 72 to 90 decibels, and coping with a crowd that's loud.

Patients encourage each other to use their vocal muscles instead of losing them.

Samantha Elandary, MA, CCC-SLP, Founder and CEO of the Parkinson Voice Project said, "But when we ask them to speak with intent, to speak like you are the CEO of a company, then they automatically do everything that they need to in order to produce a clear and intelligible speaking voice."

Jason's wife, Heather, told Ivanhoe, "We're going on kind of like normal people right now. We're planning to buy a house and start a family, and do those things that normal couples do and normal couples that are young and still have a whole life in front of them."

And thanks to the voice project, many Parkinson's patients do.

Samantha Elandary's non-profit program is being replicated around the country, helping to prevent aspiration pneumonia, the leading cause of death among Parkinson's patients. The Parkinson voice project doesn't charge patients. It's funded through donations and a pay-it-forward concept.