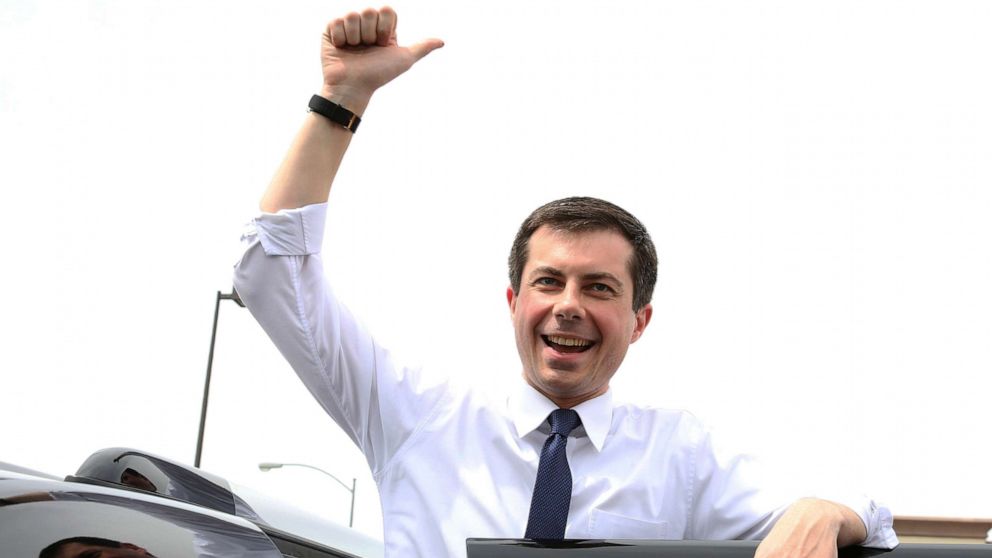 As Mayor Pete Buttigieg, the 37-year-old leader of Indiana's fourth-largest city, officially joined the 2020 contest on Sunday at a rally in his hometown, he embarks on a historic quest: if elected, he would be the first openly gay president to occupy the White House.

With his husband, Chasten, who would be the first gentleman, at his side, the South Bend mayor's candidacy has pushed the conversations around sexual orientation and faith beyond the boundaries set by traditional American presidential politics.

There has never been a viable openly LGBTQ candidate for the nation's highest office.

Buttigieg, in front of a large crowd at the site of a former Studebaker car factory turned tech center in the center's downtown core, spoke about the "audacity" of his bid.

"I recognize the audacity of doing this as a Midwestern millennial mayor. More than a little bold - at age 37- to seek the highest office in the land," he said.

"The forces of change in our country today are tectonic," Buttigied said. "Forces that help to explain what made this current presidency even possible. That's why, this time, it's not just about winning an election - it's about winning an era."

Buttigieg sparked a very public debate about his sexual orientation and his Episcopalian faith last Sunday when he openly confronted the idea that being gay is a choice and criticized his fellow Hoosier, Vice President Mike Pence, for his controversial views on LGBTQ rights.

"If me being gay was a choice, it was a choice that was made far, far above my pay grade," he said at an LGBTQ event. "That's the thing I wish the Mike Pences of the world would understand. That if you got a problem with who I am, your problem is not with me -- your quarrel, sir, is with my creator."

Pence directly responded to Buttigieg's comments in an interview with CNN Friday, in which he said, "Pete's quarrel is with the First Amendment."

"I hope that Pete will offer more to the American people than attacks on my Christian faith or attacks on the president as he seeks the highest office in the land," he added.

Buttigieg was one of the least-known competitors for the 2020 race when the year began, and many people still can't pronounce his name.

His resume includes graduating from Harvard University and Oxford University as a Rhodes Scholar and serving as a former U.S. Navy intelligence officer. And, that background, coupled with his candid tone on the trail, has helped him remain in the spotlight.

In media interviews, campaign stump speeches and town halls, Buttigieg uses his deep connection and commitment to his faith as a cornerstone of his candidacy, and in the process, is seeking to reclaim the Republican Party's hold on religious values.

"LGBTQ Americans have long been targeted by religious political extremists, leaving many of us to wince at presidential candidates evoking religious values on the campaign trail," Annise Parker, president and CEO of the LGBTQ Victory Fund, told ABC News. "But Mayor Pete speaks to religion as love and he reminds Americans that LGBTQ people are part of the larger faith community."

Chasten Buttigieg, a 29-year-old high school teacher at a South Bend Montessori school, has matched his husband's emergence over the initial months of the 2020 election season with his own Twitter following and witty testimonials from the campaign trail.

The couple married in 2018 at the Cathedral of Saint James Episcopal church in South Bend. Chasten recently spoke about his newfound notoriety at an event hosted by the Human Rights Campaign and the significance of his husband's historic candidacy.

"I now live in a world where people take photos of me in the deodorant aisle at the grocery store," he said, before adding, "It's not lost on me that I was able to marry the man I love by the grace of one Supreme Court vote."

"We need someone in the White House who will sign the Equality Act into law," he told the crowd. "And luckily, I know a guy."

Still, as he launches his candidacy, several residents in South Bend expressed concerns over Buttigieg's experience and if leading from city hall qualifies him to lead from the White House.

"I'm happy to have that representation but I don't want that to be the focus...I know that's what the nation is focused on or the fact that he is a millennial," Rita Koehler, a long-time South Bend resident who is in a same-sex relationship told ABC News. "That's that's not what presidential elections are about."

"He's been a mayor for what, eight years now? Around that, I mean he's done a decent job," James Stremme, a life-long South Bend resident and supporter of President Donald Trump told ABC News, before adding of the presidency, "That's a different level."

But one resident, Steve Snyder, who also voted for the president, said that he does not always agree with Trump and is open to voting for a Democrat in 2020, "If the right one came along."