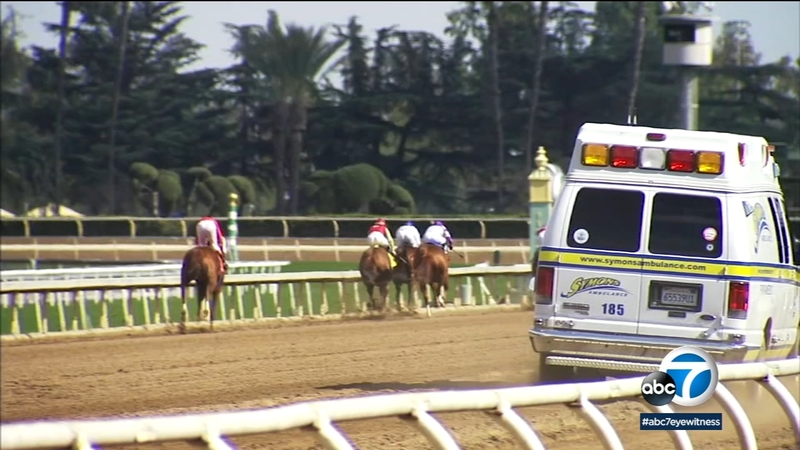 ARCADIA, Calif. -- Santa Anita Park confirmed that a horse was euthanized after being injured Thursday, becoming the 22nd equine to die at the facility since the racing season began on Dec. 22.

The injury occurred at about 8 a.m. According to the Daily Racing Form, the horse was Princess Lili B, a 3-year-old filly. She broke both front legs, the publication reported. It's unclear what caused the fatal injuries.

The racetrack had just reopened its main one-mile track for limited training Monday.

Santa Anita Park reopened its inner-exercise track in Arcadia on Friday and instituted new rules after 21 horses died over the last two months at the park.

The company that owns the track later announced it is making sweeping changes.

"These changes include a total ban of all medication on race day," said Tim Ritvo of Santa Anita Park.

Officials for the racetrack say they are also banning the use of the controversial drug Lasix and changing the way jockeys use riding crops.

As for the track: Santa Anita Park spokesman Mike Willman said crews have conducted multiple tests of the soil composition and consistency and are still slated to re-start racing on Monday.

Racing at the park has been suspended indefinitely after the number of Thoroughbred deaths started to skyrocket.

Kathy Guillermo, senior vice president with People for the Ethical Treatment of Animals, asked the industry to do more.

"Santa Anita's new procedures acknowledge that the deaths ... were never just about the rain and a bad track. They're a step in the right direction -- but they don't go far enough,'' Guillermo said.

"We know from the thousands of necropsies that have been done on racehorses over the past 20 years that the problem is usually a preexisting injury at the site of the break, and that needs to be looked at. Why are unfit horses being put on the track?" Guillermo added.

Meantime, Santa Anita Park has become the first racetrack in North America to ban race-day medication. PETA later on Thursday thanked the racetrack for its dramatic changes and called on other tracks across the country to follow suit.