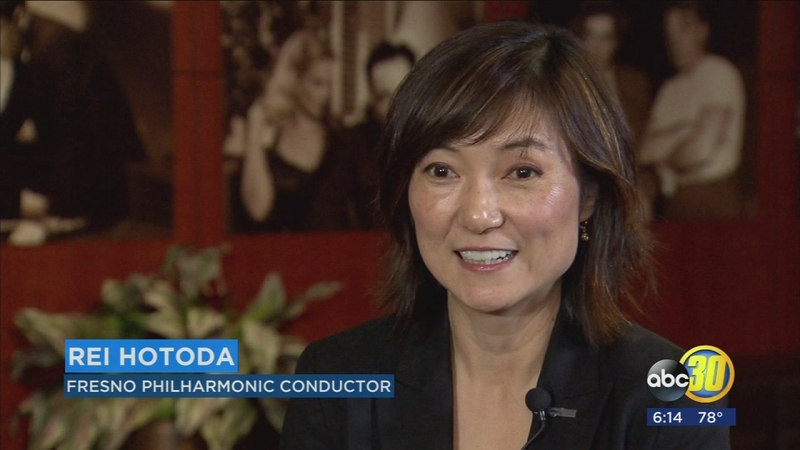 FRESNO, Calif. (KFSN) -- Rei Hotoda seemed to connect with the musicians and orchestra long before she was selected to lead the Fresno Philharmonic. During her weeklong interview, she felt a natural fit with the audience and instantly loved Fresno.

"I'm thrilled to be here in this community-- love California. So it's a great opportunity to work with these fantastic musicians! And get to know this diverse community," said Hotoda.

Hotoda will make her center stage debut Sunday during her inaugural concert that she says will give the audience a new reason to be inspired by music in the Central Valley.

"I am hoping that we will give you something new to open up and embark and open this new era of the Fresno Philharmonic and we start off with a piece that's called the new era dance and it's by an American composer, Aaron Jay Kernis."

Hotoda earned the top spot--beating out more than 100 hopefuls who applied for the coveted position.

She was the associate conductor of the Utah Symphony and Dallas Symphony Orchestra. She had the chance to conduct the Fresno Philharmonic last year during the lengthy and competitive selection process.

"She had a really special bond with the orchestra. There was a real sense of chemistry between Rei and the musicians and the audience was incredibly impressed with her concert. Some people described it as being like a rock concert," said Fresno Philharmonic President Stephen Wilson.

Hotoda has programmed her first concert to include a musical mix she says every age group will enjoy.

"You'll hear recognizable things but it's in a new language, in a new way."