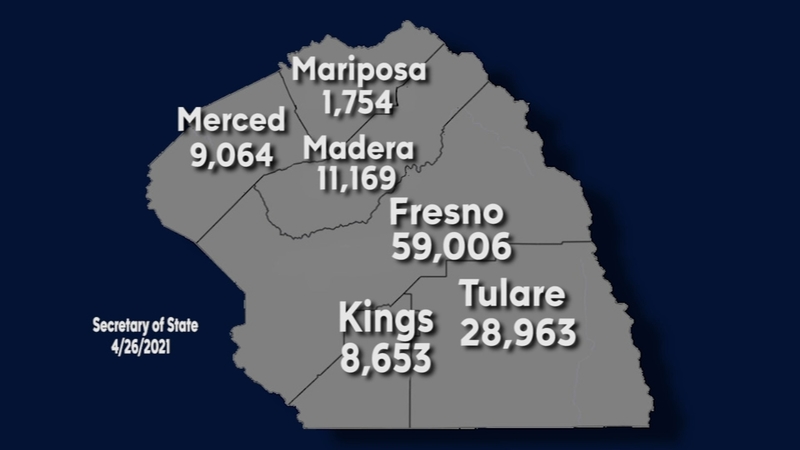 The California secretary of state's office announced Monday that more than 1.6 million recall signatures have been verified -- about 100,000 more than needed to force a vote on Newsom.

There were over 118,000 signatures from right here in Central California, including about 59,000 from Fresno County.

The governor responded on Twitter with his "stop the republican recall" campaign video saying that the recall "threatens our values and seeks to undo the important progress we've made -- from fighting COVID to helping struggling families, protecting our environment, and passing commonsense gun violence solutions."

Voters would face two questions: Should Newsom be recalled and who should replace him? The votes on the second question will only be counted if more than half say yes to the first.

Randy Economy, the senior advisor for the recall effort, says Newsom's handle on COVID is among the reasons that led to the recall response.

"The days of executive orders have got to come to a screeching halt," he said.

David Rowell with the Fresno County Democrats calls the recall an opportune move.

"I think really what we have here is just republicans trying to capitalize on a public health crisis to their own political gain," he said.
Rowell says Central Valley Democrats are confident California won't see a shift in the governor's office.

"I don't think that indicates that there is widespread unhappiness across these state with Governor Newsom's policies for the way he's performed," he said.

Estimates for the cost of the recall election range from $80 million to as high as $400 million.

The Department of Finance will then have 30 days to draft a cost estimate.

Voters could head to the polls as early as the end of the summer.
Report a correction or typo
Related topics:
politicsfresnogavin newsomgovernorrecallelection
Copyright © 2021 KFSN-TV. All Rights Reserved.
GAVIN NEWSOM
How does recalling a CA governor actually work? Here's the process