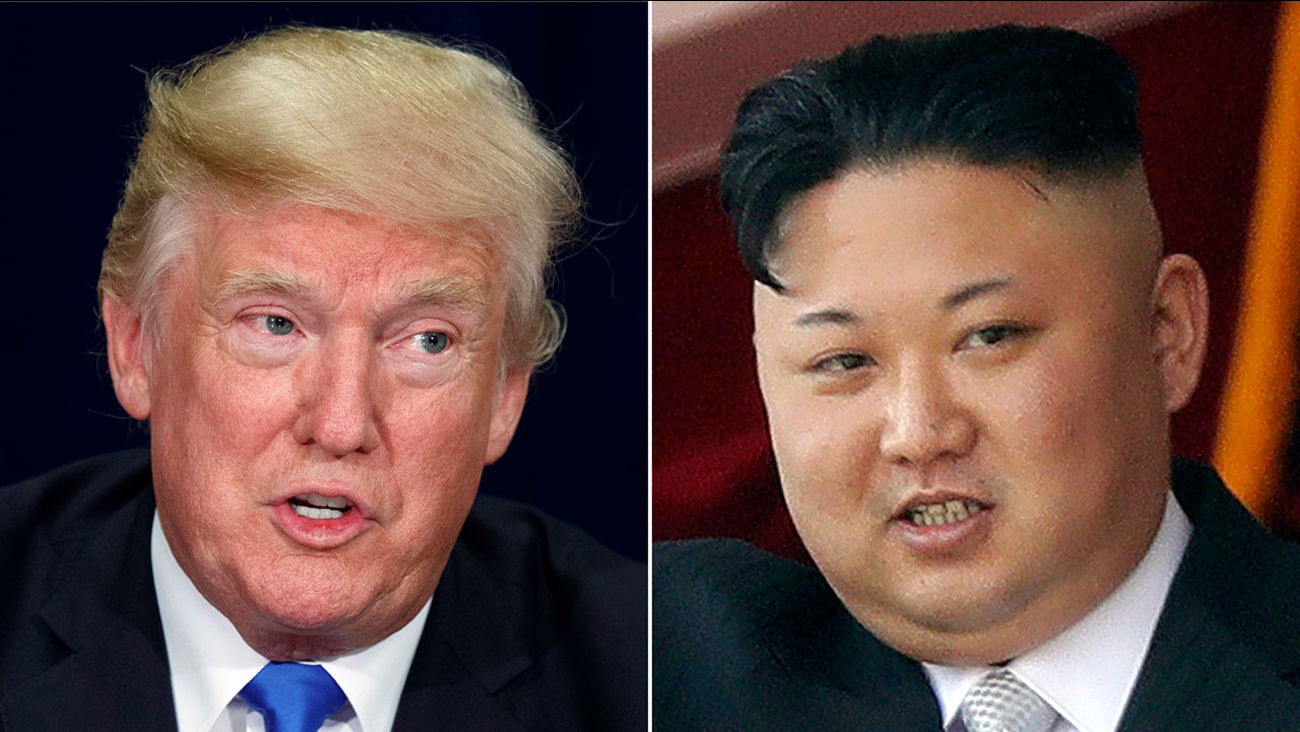 SEOUL, South Korea -- North Korean dictator Kim Jong Un and President Donald Trump plan to meet in May for nuclear disarmament talks, a whiplash development that would put two leaders who've repeatedly insulted, threatened and dismissed each other in the same room, possibly in the North Korean capital of Pyongyang.

It would have been an unthinkable suggestion just a few months ago, when the insults were at their peak - Trump was a "senile dotard" and Kim was "Little Rocket Man" - and the North was snapping off regular weapons tests in a dogged march toward its goal of a viable nuclear arsenal that can threaten the U.S. mainland.

Liberal South Korean President Moon Jae-in, who some believe has maneuvered the two leaders to this position, reflected the hope and relief many here feel about the planned summit when he declared Friday that it will be a "historical milestone" that will put the denuclearization of the Korean Peninsula "really on track."

North Korea, after all, has made a habit of reaching out, after raising fears during previous crises, with offers of dialogue meant to win aid and concessions. Some speculate that the North is trying to peel Washington away from its ally Seoul, weaken crippling sanctions and buy time for nuclear development. It has also, from the U.S. point of view, repeatedly cheated on past nuclear deals.

And now the North has landed a face-to-face meeting with the leader of the world's most powerful country, a nation that Pyongyang has long sought to draw into talks that it hopes would establish a peace treaty to end the technically still-active Korean War and drive out all U.S. troops from the Korean Peninsula, removing what the North says is a hostile encirclement of its territory by Washington and Seoul.

"Great progress being made," Trump tweeted after the South Korean national security director, Chung Eui-yong, emerged from a meeting with the U.S. president and announced the summit plans to reporters in a hastily called appearance on a White House driveway.

That remains to be seen.

North Korea still produces propaganda declaring its continuing dedication to the "treasured sword" of its nuclear program. Washington still remains publicly dedicated to annual war games with the South that the North claims are invasion rehearsal -they're expected to resume next month, after being postponed during the Winter Olympics in the South - and to keeping 28,500 troops in the South and 50,000 in Japan, largely as a way to deter North Korean aggression.

North Korea is engaged in "a ploy to serve its own interests" and make Kim look like "a bold leader of a normal, peace-loving nuclear power," according to Duyeon Kim, a visiting research fellow at the Korean Peninsula Future Forum think tank in Seoul.

"But in spite of the deceptive cloak, the agreement posed an opportunity for the United States. It put the ball in Washington's court, and provides a window for the Trump administration to engage and test the regime through direct negotiations," Kim wrote on the Bulletin of the Atomic Scientists web page.

North Korea appeared to confirm the summit plans. A senior North Korean diplomat at the United Nations in New York, Pak Song Il, told The Washington Post in an email that the invitation was the result of Kim's "broad minded and resolute decision" to contribute to the peace and security of the Korean Peninsula.

Talks between Washington and Pyongyang have previously been overseen by lower-level experts, and have often bogged down, even when so-called "breakthroughs" have come, in the pesky details, such as allowing outsiders in to inspect North Korea's nuclear compliance, for instance.

Now, the talks will start at the top. And there will be no time to settle all the problems that have scuttled previous negotiations.

It's anyone's guess what Trump and Kim might decide in the highest-level meeting in what has been essentially a bloody, seven-decade standoff between their countries.

The announcement Friday followed weeks of softening ties between the Koreas, orchestrated by the South Korean leader, Moon, and culminating in a visit by Kim Jong Un's sister to the South to observe the Olympics in Pyeongchang and then Chung's trip to meet with Kim in Pyongyang.

"This is a tried-and-true North Korean tactic, reaching out at the height of crisis in hopes of breaking out of spiraling tensions with the United States," according to a report by Zhixing Zhang and Evan Rees, Asia specialists at Stratfor, a geopolitical analytical group. "In this instance, Pyongyang has skillfully played on South Korea's fear of a military strike and hopes of reunification."

Trump took office vowing to stop North Korea from its pursuit of a working long-range nuclear-tipped missile. He's oscillated between threats and insults directed at Kim that have fueled fears of war, and more conciliatory rhetoric.

The historic announcement comes during a period of unparalleled tumult in the Trump's West Wing, with the president's policy agenda stalled and morale sinking as staff departures proliferate and disrupt efforts to instill more discipline and order.

Earlier Thursday, Chung briefed Trump and other top U.S. officials about the rare meeting the South Korean had with Kim in the North Korean capital. During that meeting, the rival Koreas agreed to hold a leadership summit in late April, the first in a decade.

Kim "expressed his eagerness to meet President Trump as soon as possible," Chung told reporters. "President Trump appreciated the briefing and said he would meet Kim Jong Un by May to achieve permanent denuclearization."

The White House said Trump's meeting with Kim would take place "at a place and time to be determined." Trump said that sanctions against the North will remain in place until there's a deal.

Kim, who had used his annual New Year's address to warn the United States of a supposed nuclear button on his desk, has an economy that's been battered by heavy international sanctions.

Koh Yu-hwan, a North Korea expert at Seoul's Dongguk University, said that the Trump-Kim meeting's success could depend on whether the United States can accept a freeze of North Korean nuclear weapons, rather than a direct process to eliminate them.