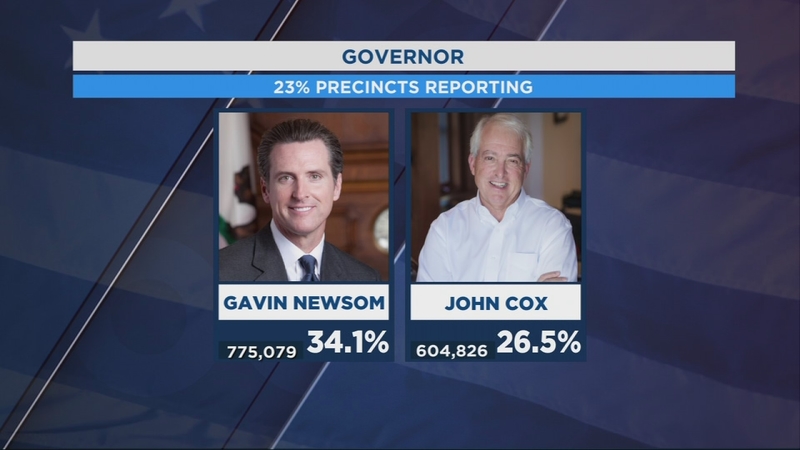 Round up of the night's biggest primary races

Cox got a significant boost from President Donald Trump's endorsement, which helped solidify his support among Republicans and push him past Democrat Antonio Villaraigosa.


US Senate
U.S. Sen. Dianne Feinstein is seeking another six-year term at age 84 and appears to be cruising into the November election.

Feinstein's opponent has yet to be determined with fellow Democrat Kevin de Leon and Republican James Bradley neck and neck to secure the second spot.

Fresno County Prosecutor Andrew Janz will be his opponent in November.

Both will advance to the November general election.


Assembly - Dist. 26
Down in the South Valley, it's a virtual three-way tie for California's 26th Assembly District seat.

In the race for Madera County District Attorney, incumbent David Linn is in a distant third place and it appears he may not advance to the November General Election.
Sally Orme Moreno and Paul Hornick currently hold the top two spots.


Propositions
Proposition 68 looks likely to pass, it would issue a $4 billion bond for parks environmental protection and water infrastructure.

Proposition 69 looks to be an overwhelming "yes vote." It will require revenue from the gas tax to be spent on improving roadways and mass transportation.

Proposition 70 is likely not to pass. It would have required a one-time, two-thirds vote in each chamber of the state legislature to pass a spending plan for revenue from the state's cap and trade program for greenhouse gasses.

Proposition 71 is passing with a large majority, it will require that ballot measures go into effect five days after the vote is certified. Currently measures can go into effect once it's clear they will pass.