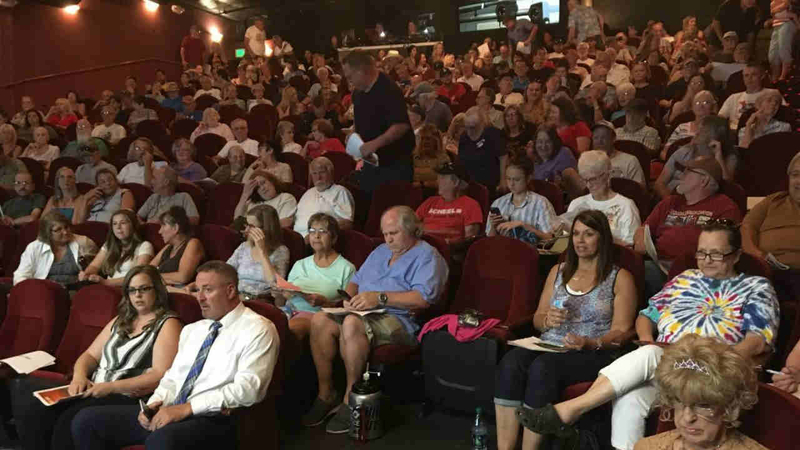 REDDING, Calif. -- There was standing room only at a community meeting on the Carr Fire burning in Shasta and Trinity counties as residents gathered to hear the latest from fire and law enforcement officials about their progress.

They heard from Cal Fire that the Carr Fire has claimed 110,000 acres, nearly 1,000 homes and buildings, and left six people dead, two of them firefighters. More than 2,500 structures are still at risk.

The Carr Fire started in Shasta County, but in the phrase Cal Fire uses, it "slopped over" into Trinity County, forcing the evacuation of the small community of Lewiston, about 35 miles west of Redding.

They don't expect the fire to move any farther east towards Redding, but it has bled over into Trinity County, where the community of Lewiston has been evacuated.

Make that standing room only at community meeting to inform residents about the Carr fire. pic.twitter.com/zUKNfwxCe2

Between the two counties 38,000 people have been displaced, but Cal Fire says they are trying their best to get them back home soon.

Some community members left the meeting early and a bit unhappy, saying the briefing was centered too much on Redding on not enough on the Trinity County side.

"It's just a repeat of everything that's happening in Redding, which we're sad for all of that too, but this fire is still active on our side," Lewiston resident Bobbie Billings said.

Cal Fire says the winds are changing and they have to adjust with it. They also say despite some hot spots they made good progress Tuesday. That's why evacuation orders were lifted in the Montgomery Ranch Area. Firefighters they are trying their best to keep people informed, but they are not always able to get into specifics.

In response to the devastating wildfires in Shasta County, Tri Counties Bank has created a verified GoFundMe campaign to help those impacted by the fires. Click here if you'd like to help.