The shooting happened before 10 pm outside the Ruth's Chris Steak House on Blackstone and El Paseo.
KFSN
By Amanda Aguilar and Jessica Harrington 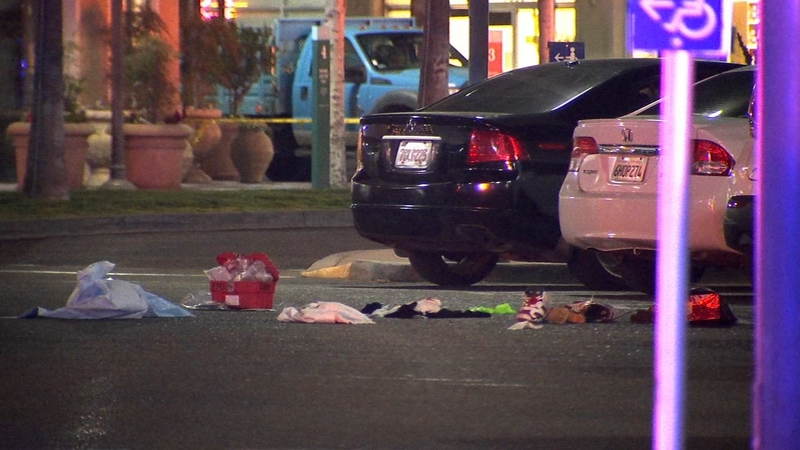 The store is just across from Ruth's Chris Steak House, where an argument inside turned into a shooting outside the night before.

Shoppers in the area were shocked to hear about the shooting and say it's concerning for their and their children's safety.

"This shouldn't be happening, especially this area," said Mirna Aguilar, who was shopping with her family Tuesday morning.

Fresno Police say just before 10 p.m. Monday, a man in his 20s was having dinner with friends at Ruth's Chris Steak House when another man in his 20s showed up and started an argument with the victim inside the restaurant.

The victim took off out of the restaurant, police believe in an attempt to get away from the suspect, and just outside the suspect opened fire.

Police say the suspect took off in a silver sedan and the victim was taken to the hospital. He is expected to survive.

Investigators are still trying to determine the motive for the shooting, and as of now, don't have evidence to suggest it was gang-related.

"This was a targeted hit. Both individuals knew each other and we know that it was not random," said Chief Paco Balderrama.

This shooting comes just a couple weeks after a deadly gang-related shooting at the Bowlero about 1.5 miles away on Blackstone and Sierra Ave.

Chief Balderrama says these types of shootings are extremely rare, but the department takes each act of violence seriously.

"The fear is real. The people are concerned, I'm concerned. A lot of our city leaders are concerned because of this violence, it is something that we're working on right now," Chief Balderrama said.

Investigators say the witnesses and victim are being mostly cooperative and officers have been able to obtain surveillance video in the area where the shooting happened.

"We do have strong leads and I expect that here within the next week or so, we're going to have the suspect in custody," Balderrama said.

Fresno Police are still asking anyone with information or video related to the shooting to call the Fresno Police Department or Crime Stoppers at 559-498-7868.

Action News reached out to River Park and Ruth's Chris Steak House's corporate office for a response to the shooting and have not heard back.