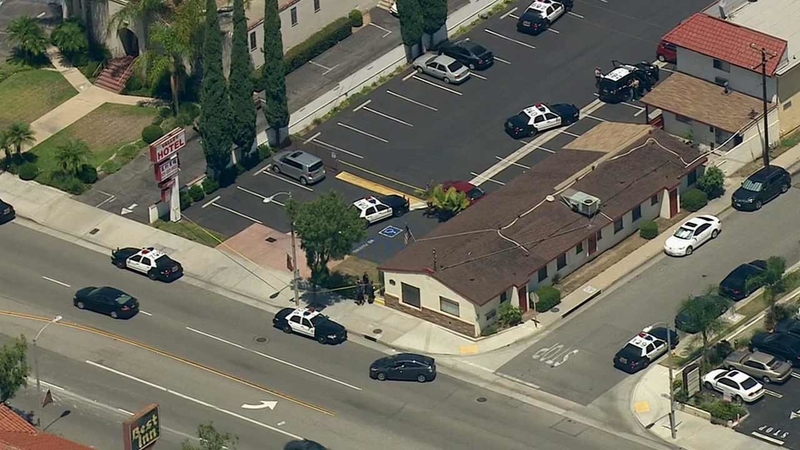 ROSEMEAD, Calif. -- A 49-year-old mother was arrested for murder after allegedly shooting her 17-year-old son to death at a hotel in Rosemead Monday morning.

George Hang was pronounced dead at the Valley Hotel in the 8700 block of Valley Boulevard after his mother, Lai Hang, called police at about 10 a.m. He had been shot in the upper torso.

"I got scared, I got really scared. It sounded so close," guest Jessie Diaz said.

Police say the gunfire came from room 111, just a few doors down from where Diaz was staying.

Lai Hang was arrested Monday night after being interviewed by detectives at the Los Angeles County Sheriff's Temple Station. She is being held in lieu of $1 million bail.

Hang and her son, who lived in Rosemead, checked into the Valley Hotel on Sunday, according to hotel workers. Diaz says she saw them walking together at about midnight. It was unclear why the pair were staying in the hotel.

"They were very friendly, no arguing, no nothing," she said.

Lt. Victor Lewandowski says there were no signs of a struggle in the hotel room, but a handgun was found.
Related topics:
rosemeadlos angeles countyshootingcalifornia
Copyright © 2021 KABC Television, LLC. All rights reserved.
CALIFORNIA
Costco and Sam's Club's secret weapon: Cheap gas prices
California taxpayers could get a rebate amid predicted budget surplus
Toontown at Disneyland closing until 2023 for complete redesign
California says if you want a booster shot now, 'absolutely' get one
TOP STORIES
Man shot multiple times at party in southwest Fresno
Cyber Monday 2021 deals shopping guide
Fauci says omicron variant will 'inevitably' arrive in US
Valley health officials bracing for arrival of new COVID-19 variant
Fresno police share tips for protecting your packages
Pedestrian hit and killed in Clovis
Is it ever too early to put up a Christmas tree?
Show More
Fresno Co. man accused of stabbing his mother, killing her boyfriend
Fresno State student killed in early morning crash on highway
Boy life-flighted after being shot in Tulare County, deputies say
1 killed, 1 hospitalized after stabbing in Auberry, deputies say
What is omicron? What to know about new COVID variant
More TOP STORIES News