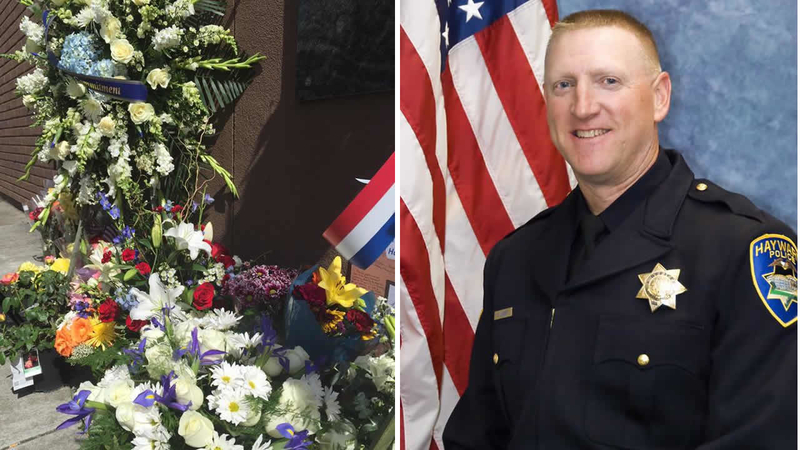 HAYWARD, Calif. -- The flag at Hayward City Hall has been lowered in honor of Sgt. Scott Lunger, who was shot and killed during an early morning traffic stop.


The 48-year-old was taken to Eden Medical Center in Castro Valley, where he was pronounced dead. Dozens of local law enforcement officers from different jurisdictions crowded around the hospital door to show their respects as the fallen sergeant's body was escorted by police procession from the hospital to the coroner's bureau.

Showing support for the Hayward police officer who was killed today in the line of duty. pic.twitter.com/bDLKdL5U1f

Some people who live near the hospital stood along the street to show support as well.

"It makes me sad. It makes me mad. I just felt like I need to come out here and show my support," said Castro Valley resident Carlos Ramirez.

According to the Officer Down Memorial Page, Lunger is the fourth officer from the Hayward police department to be killed in the line of duty, dating back to 1929.

The incident began around 3 a.m. in the area of Lion and Myrtle in Hayward. Lunger and another officer stopped a driver who was "driving erratically," according to Hayward police.

The suspect shot at Sgt. Lunger an unknown number of times. The second officer returned fire. The suspect then fled the scene.

"I can't imagine that a cop stopping a guy at a traffic light could be anything but routine," said Castro Valley resident Stephanie Blancarte. "I just felt bad that anybody would have to lose their life over it."

Meanwhile, Oakland police are investigating a truck that was found on 98th and Edes Avenue with bullet holes, which Hayward police believes to be the suspect's vehicle.

Acting Police Chief Mark Koller says they have one person of interest "in a secure location," but no arrest has been made. Koller went on to say that Hayward PD is not looking for any another suspects in this case and that are there are no threats to the community at this time.

Koller did not release any other information about the person of interest, including a name or condition. He said the second officer involved in the traffic stop was not injured.

#Hayward police say they have a "person of interest" in secure location, not a danger to community. #mapit pic.twitter.com/NJm63u35ze

Koller called Lunger's death "a devastating, dark day" for the department and the community. "He loved this job and did it eagerly," said Koller. "It's a tragedy that someone has done this."

Sergeant Lunger was described by Koller as an ideal officer. He said Sgt. Lunger was highly accomplished, promoted to sergeant in 2009 and was also a training officer and member of the gang unit. He called Lunger a personal friend.

Sergeant Lunger leaves behind a wife and two daughters.

The San Leandro, Union City and San Jose police departments, along with the Alameda County Sheriff's Department and the CHP are assisting Hayward police with the investigation.

Bay Area law enforcement agencies are now starting to put the black bands over their badges as they mourn Sgt. Lunger. Many have been sending their condolences through social media.

In Honor and Respect for @HaywardPD our thoughts and condolences are with you and your families. #InValorThereIsHope pic.twitter.com/2Ju2Rq6TU9

We mourn as a Department & a Community with @HaywardPD. We offer our condolences to the family of Sgt. Scott Lunger. pic.twitter.com/amizshFiOR

Our thoughts are with the family, friends and colleagues of @HaywardPD's Sergeant Scott Lunger. RIP brother. https://t.co/rJzxs7JLed

Our heartfelt condolences on the loss of our brother in blue, @HaywardPD Sgt. Scott Lunger. May you rest in peace. #ThinBlueLine

Our prayers and condolences for the family, friends, community and the Hayward Police Department for the loss of Sgt Lunger. @HaywardPD

Our hearts & minds are w/ @HaywardPD & the Lunger Family in this, their time of loss #RIP #UltimateSacrifice pic.twitter.com/OGbJnl4i5u

Our thoughts and prayers are with the officer, family and friends @HaywardPD.