"They actually scared me," he said. "I was like, where's the rest of this guy's teeth?"
CNNWire 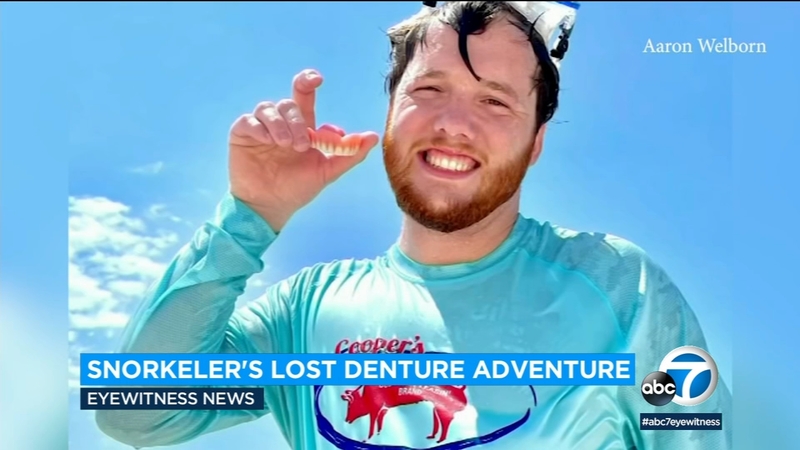 GULF SHORES, Ala. -- In the most unlikely of outcomes, a Wisconsin man who lost his dentures in the Gulf of Mexico last Monday will be getting them back thanks to a bizarre stroke of luck. A Mississippi man, vacationing in Gulf Shores later the same week just happened to find them while snorkeling near the shore.

The odds against finding the false teeth were tremendous, especially once you factor in the teeth were lost on a Monday. They weren't found until that Friday and had moved more than two miles to the west.

"They actually scared me," said Aaron Welborn. "I was like, where's the rest of this guy's teeth?"

For Aaron and his wife, Blaire, this year's annual Gulf Shores vacation will assuredly rank as the most memorable. It will forever be entwined with that of another family's, who they've never met.

To get the full story, we need to back up four days. Randy Williams of Wisconsin was in the water when the wind blew off his hat.

"And I went to grab my hat and I was sideways, and a wave just came in and hit me alongside the head and I felt them," recalled Randy Williams during a phone interview from Wisconsin. "I felt them when I went in the water and I had them in my hand for a second in the ocean and away they went."

Williams lost hope but made the most of his vacation and returned home Friday, May 13, 2022. About the same time, Welborn was wrapping up a snorkeling adventure just off the shoreline from his beach rental. He'd taken off his fins and snorkel and was headed to shore.

A closer inspection revealed a name imprinted on the dentures. Now, the challenge was on. Find the right Randy Williams and reunite him with his lost uppers. Welborn went to Facebook and posted pictures of the teeth and it quickly got attention. Someone on the thread searched out Randy Williams in Gulf Shores and a hit came back. Contact was made and within 20 minutes, the right Randy was found.

"At first I thought it was somebody playing a joke on me and I said, yeah cause I didn't know and she said, 'My cousin found them,' and I'm like, are you serious and she's like, 'Yeah' and she gave me his phone number," Williams said.

The last few days have been quite the adventure for the Welborns and Randy's teeth; so much so that the "Denture Adventure" road trip has taken on a life of its own. The last stop in Alabama...the Fox 10 News studios.

"We have laughed a lot. We've deemed this story, it's a story to really sink your teeth into," laughed Blaire Welborn.

It's a story they'll probably tell their grandkids about one day. Randy Williams says the lucky find has saved him $2,000 in replacement dentures. As for the vacation here, he says it was great other than having to cut his shrimp into small pieces and not eat steak.