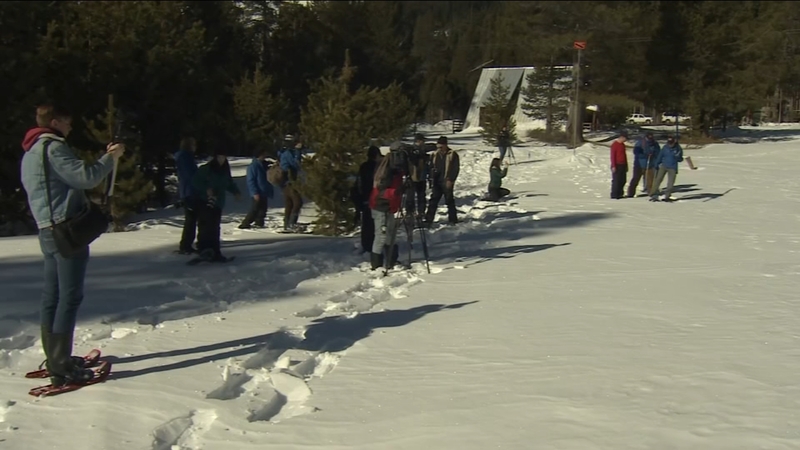 SACRAMENTO, Calif. (KFSN) -- The Department of Water Resources conducted the first Phillips Station snow survey of 2019 on Thursday, and results show the snowpack is below average for this time of year.

The manual survey recorded 25.5 inches of snow depth and snow water equivalent of 9 inches at Phillips Station, which is 80 percent average for that location. Across California, the Sierra snowpack is 67 percent of average.

"While these results are below average, they are a stark contrast to where we were a year ago at this location," said DWS Water Resources Engineer John King.

The Phillips Station snowpack feeds into the western portion of the San Joaquin valley.
"About two-thirds of California's annual rainfall occurs December through March. Total precipitation so far this water year, which began October 1, has been below average," said DWR State Climatologist Michael Anderson. "We still have three wet season months ahead of us, so there's time for the snowpack to build and improve before it begins to melt, which usually starts happening around April 1."

Statewide the snowpack measured 67% of average.

Storage at Friant Dam and Pine Flat Dam was also below normal but Sarge Green of the California Water Institute still had reason to be encouraged.

Green was encouraged by the snow-capped mountains he can see from the institute. He expects an average water year locally.

"The reservoirs managed to hang on to a little water but they're still down," he said. "During the summer we had a number of tropical storms that resulted in precipitation up in the sierras and that helped carry us over and start us out with a little more water."

Right now the US Drought Monitor shows 75% of California is under moderate drought conditions.

But Green reminded us a few storms can make a big difference.

"We're still very early. January, February, March are good precipitation months normally so we can make it up," Green said.

Many people are hopeful the next two storms headed our way get us headed in the right direction when it comes to the snowpack.

Snowpack generally provides about 30% of California's water needs as it melts in the spring and summer months. The survey by DWR is their first of five snow surveys at Phillips Station, with the others set to happen in February, March, April and May.
Report a correction or typo
Related topics:
weathercalifornia northernsnow totalssnowcalifornia water
Copyright © 2022 KFSN-TV. All Rights Reserved.
CALIFORNIA WATER
Newsom pushes water conservation: 'We have to do things differently'
Watering now only allowed once a week for Lindsay residents
CA water usage jumped 19% despite pleas for conservation
CA bill pushes for canal repairs to save water amid drought
TOP STORIES
Massive fire started by possible arsonist destroys Fresno home
Bicyclist killed by hit-and-run driver in Madera County
1 killed after car collides with semi in Fresno County
Reedley police officers fatally shoot suspect after chase, carjacking
ABC30 editor spotted suspect in Fresno Save Mart, alerted employees
More than 75,000 pounds of baby formula lands in US amid shortage
Fresno woman creating charcuterie-inspired treats for dogs
Show More
Pfizer: COVID vaccine for kids 6 months to 5 years old 80% effective
78,000 pounds of infant formula arrives in US
Man hospitalized after shooting in Visalia
Man shot in Lemoore, police investigating
Biden: US would intervene with military to defend Taiwan
More TOP STORIES News