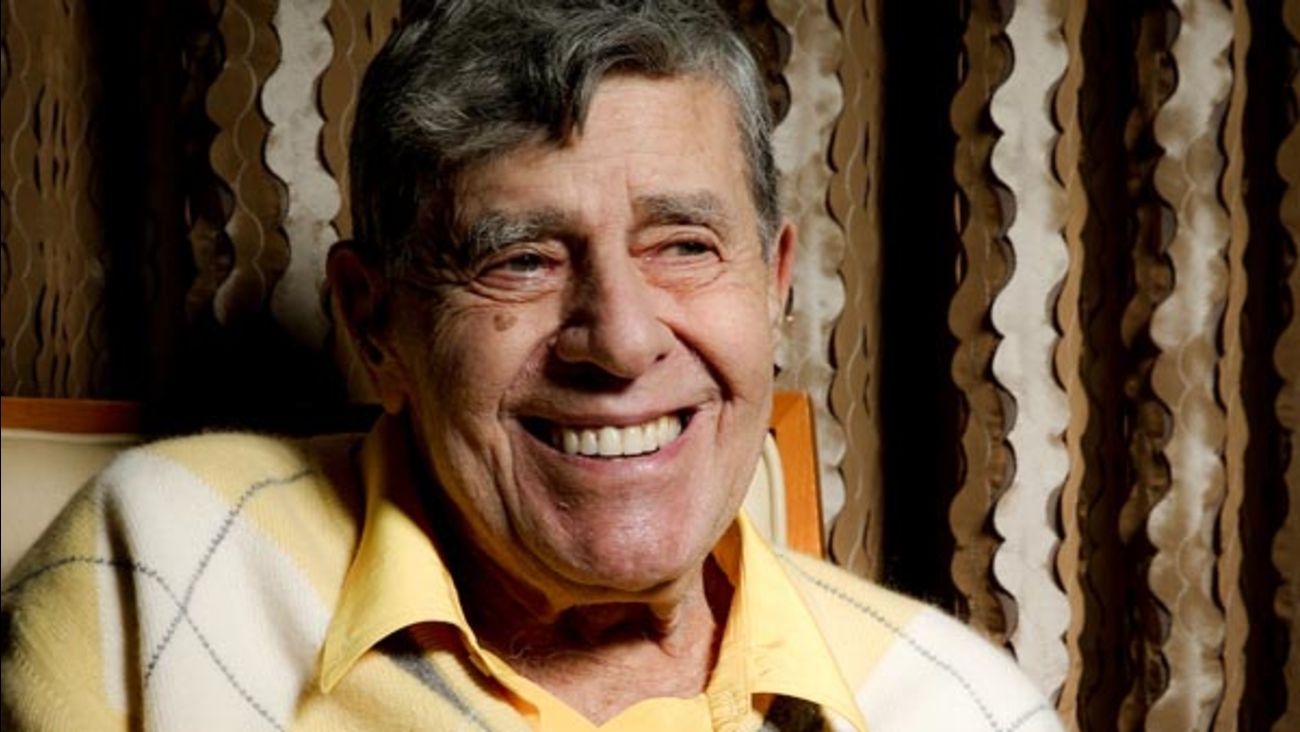 In this Aug. 24, 2016 photo, comedian Jerry Lewis smiles during an interview at the Four Seasons Hotel in Los Angeles. (Photo by Rich Fury/Invision/AP)

LAS VEGAS -- Jerry Lewis, the manic, rubber-faced showman who jumped and hollered to fame in a lucrative partnership with Dean Martin, settled down to become a self-conscious screen auteur and found an even greater following as the tireless, teary host of the annual muscular dystrophy telethons, has died. He was 91.

Publicist Candi Cazau says Lewis died Sunday morning of natural causes at age 91 in Las Vegas with his family by his side.

Lewis' career spanned the history of show business in the 20th century, beginning in his parents' vaudeville act at the age of 5. He was just 20 when his pairing with Martin made them international stars. He went on to make such favorites as "The Bellboy" and "The Nutty Professor," was featured in Martin Scorsese's "The King of Comedy" and appeared as himself in Billy Crystal's "Mr. Saturday Night."

In the 1990s, he scored a stage comeback as the devil in the Broadway revival of "Damn Yankees." And after a 20-year break from making movies, Lewis returned as the star of the independent drama "Max Rose," released in 2016.

In his 80s, he was still traveling the world, working on a stage version of "The Nutty Professor." He was so active he would sometimes forget the basics, like eating, his associates would recall. In 2012, Lewis missed an awards ceremony thrown by his beloved Friars Club because his blood sugar dropped from lack of food and he had to spend the night in the hospital.

In his 90s, he was still performing standup shows.

A major influence on Jim Carrey and other slapstick performers, Lewis also was known as the ringmaster of the Labor Day Muscular Dystrophy Association, joking and reminiscing and introducing guests, sharing stories about ailing kids and concluding with his personal anthem, the ballad "You'll Never Walk Alone." From the 1960s onward, the telethons raised some $1.5 billion, including more than $60 million in 2009. He announced in 2011 that he would step down as host, but would remain chairman of the association he joined some 60 years ago.

His fundraising efforts won him the Jean Hersholt Humanitarian Award at the 2009 Oscar telecast, an honor he said "touches my heart and the very depth of my soul." But the telethon was also criticized for being mawkish and exploitative of children, known as "Jerry's Kids." A 1960s muscular dystrophy poster boy, Mike Ervin, later made a documentary called "The Kids Are All Alright," in which he alleged that Lewis and the Muscular Dystrophy Association had treated him and others as objects of pity rather than real people.


"He and his telethon symbolize an antiquated and destructive 1950s charity mentality," Ervin wrote in 2009.

Responded Lewis: "You don't want to be pitied because you're a cripple in a wheelchair, stay in your house!"

He was the classic funnyman who longed to play "Hamlet," crying as hard as he laughed. He sassed and snarled at critics and interviewers who displeased him. He pontificated on talk shows, lectured to college students and compiled his thoughts in the 1971 book "The Total Film-Maker."

"I believe, in my own way, that I say something on film. I'm getting to those who probably don't have the mentality to understand what ... 'A Man for All Seasons' is all about, plus many who did understand it," he wrote. "I am not ashamed or embarrassed at how seemingly trite or saccharine something in my films will sound. I really do make films for my great-great-grandchildren and not for my fellows at the Screen Directors Guild or for the critics."

In his early movies, he played the kind of fellows who would have had no idea what the elder Lewis was talking about: loose-limbed, buck-toothed, overgrown adolescents, trouble-prone and inclined to wail when beset by enemies. American critics recognized the comedian's popular appeal but not his aspirations to higher art; the French did. Writing in Paris' Le Monde newspaper, Jacques Siclier praised Lewis' "apish allure, his conduct of a child, his grimaces, his contortions, his maladjustment to the world, his morbid fear of women, his way of disturbing order everywhere he appeared."

The French government awarded Lewis the Chevalier of the Legion of Honor in 1983 and Commander of Arts and Letters the following year. Film critic Andrew Sarris observed: "The fact that Lewis lacks verbal wit on the screen doesn't particularly bother the French."

Lewis had teamed up with Martin after World War II, and their radio and stage antics delighted audiences, although not immediately. Their debut, in 1946 at Atlantic City's 500 Club, was a bust. Warned by owner "Skinny" D'Amato that they might be fired, Martin and Lewis tossed the script and improvised their way into history. New York columnists Walter Winchell and Ed Sullivan came to the club and raved over the sexy singer and the berserk clown.

Lewis described their fledgling act in his 1982 autobiography, "Jerry Lewis in Person": "We juggle and drop a few dishes and try a few handstands. I conduct the three-piece band with one of my shoes, burn their music, jump offstage, run around the tables, sit down with the customers and spill things while Dean keeps singing."

Hollywood producer Hal Wallis saw them at New York's Copacabana and signed them to a film contract. Martin and Lewis first appeared in supporting roles in "My Friend Irma" and "My Friend Irma Goes West." Then they began a hit series of starring vehicles, including "At War With the Army," ''That's My Boy" and "Artists and Models."

But in the mid-1950s, their partnership began to wear. Lewis longed for more than laughs. Martin had tired of playing straight man and of Lewis' attempts to add Chaplinesque pathos. He also wearied of the pace of films, television, nightclub and theater appearances, benefits and publicity junkets on which Lewis thrived. The rift became increasingly public as the two camps sparred verbally.

"I knew we were in trouble the day someone gave Jerry a book about Charlie Chaplin," Martin cracked.

On July 24, 1956, Martin and Lewis closed shop, at the Copa, and remained estranged for years. Martin, who died in 1995, did make a dramatic, surprise appearance on Lewis' telethon in 1976 (a reunion brokered by mutual pal Frank Sinatra), and director Peter Bogdonavich nearly persuaded them to appear in a film together as former colleagues who no longer speak to each other. After Martin's death, Lewis said the two had again become friendly during his former partner's final years and he would repeatedly express his admiration for Martin above all others.

The entertainment trade at first considered Martin the casualty of the split, since his talents, except as a singer, were unexplored. He fooled his detractors by cultivating a comic, drunken persona, becoming star of a long-running TV variety show and a respected actor in such films as "Some Came Running," ''The Young Lions" and "Rio Bravo."

Lewis also distinguished himself after the break, revealing a serious side as unexpected as Martin's gift for comedy.

He brought in comedy director Frank Tashlin for "Rock-a-bye Baby," ''Cinderfella," ''The Disorderly Orderly," ''The Geisha Boy" and "Who's Minding the Store?", in which he did a pantomime of a typist trying to keep up with Leroy Anderson's speedy song "The Typewriter."

With "The Bellboy," though, Lewis assumed the posts of producer, director, writer and star, like his idol Chaplin. Among his hits under his own direction was the 1963 "The Nutty Professor," playing a dual Jekyll and Hyde role, transforming himself from a nerdy college teacher to a sexy (and conceited) lounge singer, Buddy Love, regarded as a spoof of his old partner Martin.

He also directed "The Patsy," ''The Errand Boy," ''The Family Jewels" and "The Big Mouth." Lewis' more recent film credits included such low-budget releases as "Arizona Dream," co-starring Johnny Depp, and "Max Rose," which came out in 2016. He had a guest shot on television's "Mad About You" and was seen briefly in Eddie Murphy's remake of "The Nutty Professor."

He was born Joseph Levitch in Newark, New Jersey, on March 16, 1926. His father, billed as Danny Lewis, was a singer on the borscht and burlesque circuits. His mother played piano for Danny's act. Their only child was often left alone in hotel rooms, or lived in Brooklyn with his paternal grandparents, Russian Jewish immigrants, or his aunts in New Jersey.

"All my life I've been afraid of being alone," Lewis once said. In his later years the solitude haunted him, and he surrounded himself with an entourage at work and at home.

Joey Levitch made his professional debut at age 5, singing the Depression tearjerker "Brother, Can You Spare a Dime?" to great applause. He recalled that he eventually lost all interest in school and "began to clown around to attract people's attention."

By 16, Jerry Lewis (as his billing read) had dropped out of school and was earning as much as $150 a week as a solo performer. He appeared in a "record act," mouthing crazily to the records of Danny Kaye, Spike Jones and other artists. Rejected by the Army because of a heart murmur and punctured eardrum, Lewis entertained troops in World War II and continued touring with his lip-sync act. In 1944 he married Patti Palmer, a band vocalist.

The following year he met Martin, on a March day in 1945 in Manhattan, Broadway and 54th to be exact. Lewis was on his way to see an agent, walking with a friend, when his friend spotted an "incredibly handsome" man wearing a camel's hair coat. Lewis and Martin were introduced and Lewis knew right off that this new acquaintance, nine years older than him, was "the real deal."

"'Harry Horses,' I thought," Lewis wrote in the memoir "Dean and Me," published in 2005. "That was what we used to call a guy who thought he was smooth with the ladies. Anybody who wore a camel's-hair overcoat, with a camel's-hair belt and fake diamond cuff links, was automatically Harry Horses."

Lewis couldn't escape from small-time bookings. The same was true of Martin, who sang romantic songs in nightclubs. In 1946, Lewis was playing the 500 Club, and the seats were empty. Lewis suggested hiring Martin to bolster the bill, promising he could do comedy as well as sing.

Fame brought him women and Lewis wrote openly of his many partners. After 36 years of marriage and six sons, Patti Lewis sued her husband for divorce in 1982. She later wrote a book claiming that he was an adulterer and drug addict who abused their children. Son Gary became a pop singer whose group, Gary Lewis & the Playboys, had a string of hits in 1965-66.

In his late 50s, Lewis married Sandra Pitnick, 32, a former airline stewardess. They had a daughter, Dani, named for Jerry's father.
Report a correction or typo
Related topics:
societycelebrity deaths
Copyright © 2020 by The Associated Press. All Rights Reserved.
CELEBRITY DEATHS

Johnny Nash, singer behind 'I Can See Clearly Now,' dies at 80