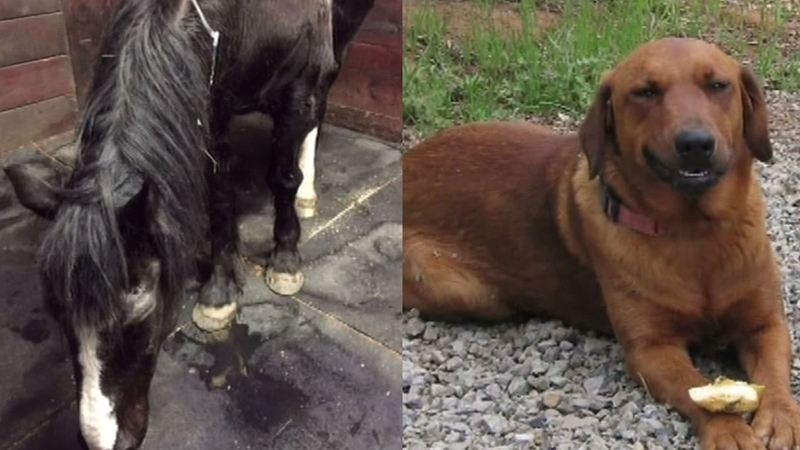 SEBASTOPOL, Calif. -- Someone is poisoning animals in Sonoma County. Sheriff's investigators confirmed someone deliberately placed poisoned biscuits in a pasture in Sebastopol. A horse and a dog died as a result.

The owner of the deceased animals Leslie Webb told ABC7 News, "These are my kids and they mean the world to me."

Webb has video of her last beach ride on her horse named "Cowboy." Cowboy and her dog, Rosie, were poisoned by biscuits that were left in their pasture.

Webb said, "For them to put out three piles out for three horses. Yeah, they know something about horses."

The UC Davis Animal Health and Food Safety Lab confirmed someone laced the biscuits with oleander, a toxic plant that damages the organs. Both animals died the day after they were poisoned.

Webb has another horse who is still alive. Oscar was also poisoned, but he is recovering. The vet says there won't be any permanent damage to his liver or kidneys.

Three alpacas, a llama, another dog and a cat have recently died nearby. But the Sonoma County Sheriff's Office says this is the only confirmed intentional poisoning case. There is an uneasy feeling that has taken over the rural neighborhood.

Neighbor Diane Phelps told ABC7 News, "A lot of us like to give them carrots and apples. Pet them, whatever it is, but it has eliminated that now because for fear that they may think that we're somehow harming their animals."

So far there have been no arrests, but investigators say they are keying in on a person of interest.